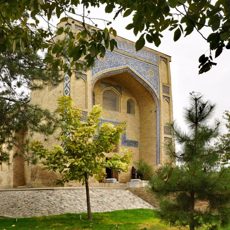 Mausoleum of  Abubakr Kaffal-Shashi - one of the significant monuments of culture and architecture of Tashkent - is included in the historical and architectural complex of Khazret Imam, located in the ancient district of the city.

Historically, the architectural ensemble Hazret Imampoeval was due to the mausoleum of Abubekr Kaffal al-Shashi, around which new buildings were built, which for a few centuries formed a whole complex. The square and architectural ensemble were named Khazret Imam ("Saint Imam") in honor of the famous imam, Koran scholar, scholar and preacher  Abubakr Kaffal-Shashi. The great scientist and theologian was born in Tashkent in 903 in the family of an artisan-kaffal (master for the manufacture of skillful locks). The child was named after the companion of the Prophet Muhammad and the first Caliph - Abu Bakr. He owes an excellent education to the Tashkent madrasah, and then to Bukhara, Termez and Samarkand. Abubakr was considered a disciple and spiritual heir of famous Muslim theologians and scholars - Imam al-Bukhari and Muhammad at-Termezi. Deeply devoted to the Muslim religion, Abubekr Kaffal al-Shashi more than once performed hajj (pilgrimage) to Mecca, traveled to the largest cities of the Muslim world, meeting and discussing with the most prominent Muslim scholars of the time. His knowledge of theology was so great, and authority is so indisputable that in the Arab world Abubekra was called the Great Imam. Many contemporaries even believed that in Maverannahr there are no scholars who are equal to the Great Imam. Having many honorary titles and epithets, he remained in the memory of his contemporaries, primarily as a "Tashkent", that is why he was nicknamed "Kaffal al-Shashi" - "a castle from Tashkent". By the way, there is a legend that the nickname "Kaffal" or "Zamochnik" he received for having produced a striking beauty castle, the key to which weighed more than a kilogram.

Like many enlightened people of the past, Aboubekr Kaffal al-Shashi was not only a theologian. It is known that he was a skilful poet and thinker. Up to now, only a part of the works created by him has reached. For the most part he devoted himself to philosophy and jurisprudence on the teachings of ash-Shafi, but some of his works were devoted to eloquence and poetry, his work "The Beauty of Dialectics" is known.

Abubekr Kaffal Al-Shashi devoted his life to the spread of Islam and religious enlightenment. That is why in 976, after the death of Kaffal Al-Shashi, the place where he was buried (in the Bogi-Keikaus suburban garden, near the fortress wall of Tashkent), was considered a saint. The building of the first mausoleum of Abubekr Kaffal al-Shashi, built in the 10th century, did not survive. In its place in the middle of the 16th century a new mausoleum was built, which has survived to this day. Closely looking at the main facade, you can see the names of architects who participated in the construction, as well as the date of construction.

The mausoleum of Abubekr Kaffal al-Shashi was built in an unusual architectural style for mausoleums - khanaka. Initially, the khanaks were built as shelters for dervishes and wanderers. In this they resemble Christian monasteries, but the essential difference was that it was easy to enter and exit easily into the khanaka, unlike the monastery.

Abubakra's grave of Kaffal al-Shashi became a pilgrimage site for Muslims, which is why the mausoleum was built as a khanaka. It has a quadrangular shape and an asymmetrical layout. In addition, it is located on a high platform, lifting the building of the mausoleum over the rest of the buildings. Despite the massive nature, the mausoleum of Aboubekra Kaffal al-Shashi seems to be directed upwards and even slender not only because of the lifting platform, but also thanks to the dome crowning it. It is interesting that the entrance portal is facing north, and not towards Mecca, like most mausoleums. In addition to the large cruciform hall, the building of the mausoleum includes three tiers of cells (hujras) for pilgrims located in corner pylons.