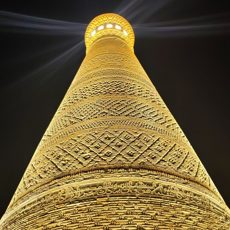 The Poi-Kalyan architectural ensemble (in some sources, Poy-Kalyan) stands in the heart of the old city of Bukhara. The name of the complex is translated into Russian as "foot of the great" or "foot of the minaret". Poi-Kalyan dates back to the XII-XIII centuries and is considered the Central architectural ensemble of Bukhara. In the 12th century, Arslan Khan of the Karakhanid dynasty began rebuilding the city and moved the main buildings to a new location.

In particular, the Cathedral mosque with a minaret was rebuilt on another street. However, due to errors or shortcomings in the construction, immediately after the completion of the work, the minaret fell and destroyed most of the new mosque. By 1121, the second mosque was built, and 6 years later, the construction of the minaret, which can be seen today, was completed. The mosque was later rebuilt again in the XV century — it is now preserved in the Poi-Kalyan complex. Already in the XVI century, a madrasa was built, facing the mosque.

Despite the fact that the buildings of the architectural ensemble were built in different periods, under rulers from different dynasties, the overall appearance of the complex is quite harmonious and integral. In the evenings, lighting is turned on at the facilities. 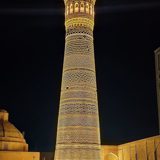