Lyabi-Khauz Ensemble is one of the most famous and popular attractions in the city. Here on the same territory are collected magnificent architectural masterpieces-madrassas and khanaka Nadir Divan-Begi, built in 1622, and Kukeldash madrassas, whose construction dates back to 1568. These beautiful buildings rise along the coast of an artificial reservoir of impressive size (42 by 36 meters). The depth of this reservoir is 5 meters. In literal translation, the name of the ensemble means "the shore of the pool".

This is where the population of the city in the past centuries received fresh water produced by local water carriers. During the Soviet Union, many reservoirs in Bukhara were actively drained due to the danger of spreading various infections, but the Lyabi Hauz pond miraculously remained intact.

The founder of the pond is considered to be the vizier Nadir Diwan-Begi. It was on his orders that a large reservoir was dug in the territory between the two madrassas and the khanaka. The vizier took care of the architectural appearance of the city, and the pond became the final point in the formation of the majestic Bukhara landscape. Some historians tell in detail about the origin of the pond.

They say that once on the site of today's reservoir there was a house of an old widowed Jewish woman. When the vizier chose this territory, he came to the old woman and offered her to buy her farmstead for a very large amount of money. But the woman did not agree to sell her home. Diwan Begi took her to the Emir, hoping that the ruler would settle their dispute in favor of the vizier and force the Jew to agree to the sale. But Emir Imam Kuli Khan was very wise: he did not make a single decision, but instructed the Board of Muftis to consider the case. Of course, the Muftis forbade the vizier to take away a woman's only home if she did not want to leave it voluntarily, because they believed that Jews and Muslims should have the same rights. But Nadir Diwan-Begi did not give up. He decided to dig a ditch right along the estate of the Jewess. As a result, the cunning nobleman achieved his goal: the water from the ditch gradually destroyed the walls of the old building, and the woman still gave up. But as payment for the house, she asked for another plot to build a synagogue on it. The vizier, without hesitation, gave the old woman part of his own territory. The first Jewish Church in the city was built on it, and soon a whole quarter was formed around the synagogue, which is now called "Jewish". In General, everyone was satisfied: the Jew got what she wanted, and Divan-Begi dug the desired pond. By the way, another unofficial name of this reservoir has also come down to our days — Hauz-I Bazur, which literally means "built with compulsion"in Russian.

In the middle ages, the Lyabi-Hauz played the role of a market square. Major trade deals were made here. It was quite convenient to trade here only because the city territory is built up very densely, and Lyabi-Hauz is one of the few places in Bukhara that has a sufficient amount of free space. 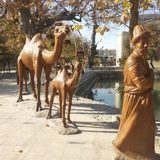 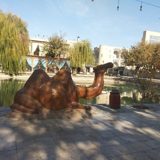