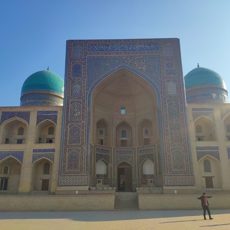 The Miri Arab madrasah is still used for its intended purpose today. The name literally translates into Russian as "Emir of Arabic". It was built by Ubaydullah Khan for the Sheikh, the spiritual mentor of the Sheibanid dynasty, the leader of the Muslims of Bukhara-Miri Arab of Yemen (Abdullah Yamani). Here, in the second hall, the tombs of the Khan, the Sheikh himself, and other nobles were preserved.the First hall was used for lectures and as a mosque.

The two-storey building has 114 cells for students. Are used in the decoration carved kasynie mosaics, floral designs and complex characters. According to a popular version, in order to raise funds for the construction of a madrasa, the Khan sold three thousand Persians who were captured during the war. For a long time, the school was considered one of the best in Central Asia, where many outstanding scientists and thinkers taught. It is interesting that even in the Soviet Union, the madrasa continued to function as a religious school. In the XX century, restoration work was carried out in the madrasah, after which training was resumed within its walls.

The height of the minaret is 46.5 meters.