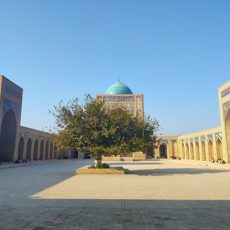 The Kosh-Madrasah, which means “double” or “paired” madrasah in Persian, includes a complex of two elegant buildings - Madori Khan Madrasah and Abdullahan Madrasah. These two madrassas form a kosh - the traditional architectural ensemble of Central Asia, consisting of two buildings located on the same axis and facing the facades to each other. The ensemble of these historical buildings was erected in the 16th century, their founder is the then-famous Uzbek khan Abdullahan, belonging to the Sheibanid dynasty.

Kosh Madrasah is included in the list of UNESCO World Heritage Sites, like many other architectural monuments of Bukhara - the so-called cultural center of the country.

Madrasah Modari Khan
Modari Khan Madrasah, the name of which is translated from the Uzbek language as “mother of the Khan” (in the original - Modarikhon madrasasi) was built in 1566–67 (or in 947 according to the Hijra calendar). Of the two buildings of this architectural ensemble, this madrasah is the smallest in size. The construction was erected in honor of the beloved and revered mother of Abdullah Khan II on his personal instructions.

Modari Khan Madrasah is a traditional Asian building, consisting of two aivans (vaulted rooms) with hujras (dormitories for teachers and students) located around the central courtyard. On both sides of the entrance portal there are respectively a darskhan (a room intended for training sessions and halls for lectures) and a cottage mosque. Above the entrance, a majolica inscription, made in poetic form and indicating the date of construction of the madrasah, has been preserved. Artistic decoration of the building is considered quite simple and modest.

The facade of Modari Khan Madrasah is located at an angle to the rest of the building, due to the fact that during its construction there was already a functioning street and built-up neighboring quarters, which did not allow to build the building in a rectangular shape. Therefore, this structure differs from all other similar structures in its unusual trapezoidal shape. The exterior facades of the Modari Khan Madrasah are decorated with an original brick multicolor mosaic depicting flower buds, considering which you can always find something new in it.

Madrasah of Abdullahan
The Abdullah Khan Madrasah (or Abdullahon Madrasasi) was built a little later than the Modari Khan Madrasah in 1589–90. This building is considered one of the most outstanding works of architecture in Central Asia.

The Abdullah Khan Madrasah includes a two-wing madrasah building and a majestic entrance portal. Inside the building is a large lecture hall, covered with a magnificent dome. By its size, the Abdullah Khan madrasah is in third place among all schools in Bukhara (after the Kukeldash madrasah and Miri-Arab madrasah).

The facades of this building are also decorated with majolica of cold colors (blue, blue, green, white), which is best studied from a long distance. The ancient wall ornament of this educational institution tells about the traditional Central Asian landscapes and gives the building a colorful and festive appearance. As in the Modari Khan Madrasah, this building has classes for classes, entrances to which are carried out directly from the street through special wooden doors. On the second floor of the Abdullah Khan Madrasah there are a number of arched loggias, which is its distinctive feature, since usually in such buildings only blind arches are located on the facades. At the corners of the madrasah, towers of the “guldast” are built (instead of minarets), cut off by the height of the side wings of the building.

Kosh madrasahs are often compared to two majestic gigantic teachers who are watching birds studying at these schools from a bird's eye view. The area located between these two madrassas is considered one of the most beautiful squares in Bukhara. 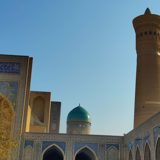