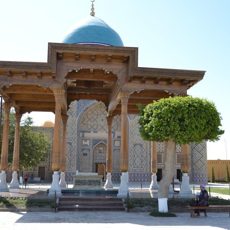 The Khoja Abdahadik al Gijduvani complex is located in the city of Gijduvan (about 50 km North-East of Bukhara).  It is formed around the grave of the famous Sufi Shaikh, the founder of an independent school of mysticism in the region of Central Asia, Abdalhalik Ibn Abdaljalil al-Gijduvani (d. in 1180 or 1220).   His father was considered an authoritative faqih, bore the honorary nickname Abduljalil and ascended his origin to Imam Malik b. Anas (713-795).

Abdalhalik himself, according to the written tradition, studied with the famous mystic Abu Yakub Yusuf al-Hamadani (1048 - 1140) and then founded his own school. This mystical school was later called “Khojagan” and was fully adopted by Bahauddin Muhammad, who is better known by his nickname Naqshband (1318 -1389).

Al-Gijduvani formulated about 60 provisions that a true Muslim who is engaged in mystic-ascetic practice must adhere to: compulsory observance of Shariah regulations, eradication of reprehensible "innovations" in Sufism (tasavwuf), voluntary but self-sufficient poverty, asceticism, renunciation of worldly pleasures, obligatory the study of fiqh, etc. He considered reprehensible any contacts with the powers that be, especially with the military and rulers, any interference in politics.

Obviously, taking into account the exceptional popularity among the Muslims of the region of the tomb of al-Gijduvani, the famous ruler Mirzo Ulugbek ordered the construction of a madrassah near this place, which was completed in 1433 with a modern chronology.

In 2003, on the initiative of UNESCO and by decision of the Cabinet of Ministers of the Republic of Uzbekistan of December 4, 2002, the 900th anniversary of the birth of Abdalkhalik al-Gijduvani was widely celebrated. The restoration of the complex and commemorative events was led by the President of the Republic of Uzbekistan Islam Karimov. Extensive restoration and landscaping work was carried out on an area of ​​six hectares. A visit to this popular place continues to this day. The authors of the restored inscriptions are X. Salih and A. Razzokov. 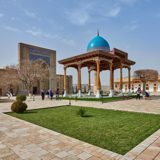