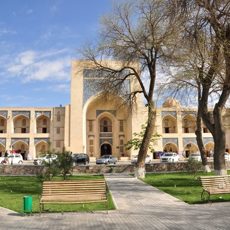 One of the most famous sights of Bukhara — Kukeldash madrasa-is conveniently located near the Lyabi-Hauz architectural complex. This educational institution was built in the period from 1568 to 1569. This is the largest Bukhara madrasa in size, as well as one of the largest similar educational institutions throughout Central Asia. The name "Kukeldash" is very common. There is a madrasa of the same name in Tashkent. The name means "Sunny friend" or "Milky brother".

Kukeldash madrasah has a completely non-standard architectural form and decoration for that time. Most of the educational institutions in Bukhara during this period were built schematically, according to one model. These were stately buildings with a chic entrance group, tightly enclosed on all sides by huge walls. This tradition is not observed during the construction of Kukeldash. The walls around the building are not completely deaf, they are dotted around the perimeter with numerous niches and balconies with ganch decorations. In total, 160 rooms are located on two floors and in the courtyard of the building.

Kukeldash is of great importance for modern history also because one of the most famous writers of Central Asia — Sadriddin Aini-lived and created his great works in one of the local cells for quite a long time. He died in the middle of the 20th century, but his work is immortal. He left descendants a huge number of talented literary masterpieces, and today the name of the writer is immortalized in the walls of the Kukeldash madrasa-a small memorial was created inside the building and some of Sadriddin Aini's personal belongings and even some of his handwritten texts were put on public display.

The madrasa was built during the reign of Abdullakhan II. Funding this large-scale construction project of the Emir of Kulyab. This Emir, while at his state post, found several heads of state at once, but managed to get the respect and approval of each of them. This wisdom and diplomacy allowed Kulbab to be awarded one of the most honorable titles-the title of Kukeldash. And then a madrasa was named after him.

There are suggestions that Kukeldash madrasa is one of the components of the Lyabi-Hauz ensemble, but this statement is fundamentally incorrect. Experts in archaeology, having carefully studied all the buildings, concluded that Kukeldash is an independent structure.

Kukeldash did not always serve as a madrasa. Over time, its purpose changed periodically. There was a time in the history of the structure when it was used as a caravanserai. The most famous and talented masters of that time were engaged in the construction of madrassas. Ganch arches are intricately intertwined and together create stunning beauty of decorative arches. The gates to the educational institution are decorated with mosaics, which were not assembled using any adhesives or nails. The main entrance group is lined with geometric ornaments.

The madrasah has experienced many events, including a devastating earthquake. The element then thoroughly destroyed the portal in front of the building, which was then simply fastened with metal brackets.

During the reign of Beckler-Beck, the upper floor of the building and the sky-blue domes were dismantled brick by brick. Nevertheless, the madrasa has retained its appeal to this day thanks to talented craftsmen who initiated its reconstruction on their own.

Madrassas are being reconstructed today. Large-scale restoration and alteration works are planned. 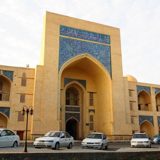