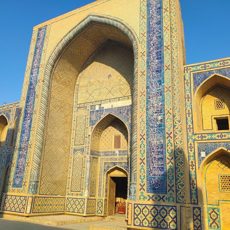 Madrassah of Ulugbek (1417) was built by the best architects of his time - Ismail isfagani and Najmetdin Bukhari. The madrasah is characterized by balance and harmony of forms, combining strict grandeur and simplicity in decoration. It is a large-scale rectangular building with a high portal on the front of the main entrance and a traditional courtyard. An interesting feature of Ulugbek madrasa is that the corridor at the entrance does not lead to the courtyard, as was customary during the construction of the madrasa, but is divided and leads in two directions - to the mosque and darshona (training hall).

On the doors of the Ulugbek madrasa, a phrase from the Koran was carved, which can be called the motto of Ulugbek himself: "the pursuit of knowledge is the duty of every Muslim and Muslim woman." There is also another saying: "over the circle of people who are informed in the wisdom of books, let the doors of God's blessings be opened every day."

Ulugbek became famous all over the world for his research in the field of astronomy. It is not surprising that the elements of Ulugbek's madrasa ornament are dominated by astral motifs, which symbolizes his worldview as a scientist-astronomer. Some details of the decor differ from each other by the method of application - this is due to the fact that the madrasah has been restored several times.

Ulugbek madrasa could accept up to 80 students who studied astronomy, mathematics, Arabic and religious subjects. Many madrasa graduates became prominent thinkers and poets.

Today, Ulugbek madrasa is one of the most famous architectural monuments of Bukhara, which is visited annually by thousands of enthusiastic connoisseurs of Eastern culture. The Ulugbek madrasa building houses the Museum of the history of restoration of Bukhara monuments. 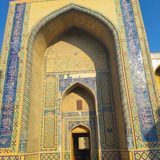