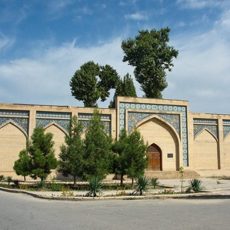 The Said Akhmad-Khoja Madrasah - built in the 19th century. Outwardly, it looks like other similar religious buildings of those times, located in the Ferghana Valley. The entire facade of the building is surrounded by a solid wall, divided into sections, which are decorated with drawings in the form of arrow arches. In the arch itself there is an entrance door through which you can go into the patio. There are aivan and a mosque.

Due to the wide ditch on the territory of this courtyard is always cool and fresh.Here, under the long-term spreading plane trees, you can hide from the scorching sun. Around the courtyard of the khujra is a small room that resembles a cell.

The columns supporting the ceiling, surrounded by Ayvan on all four sides. In the mosque, you can visit the prayer hall, in the architecture of which you can notice elements typical of European architecture, which looks somewhat strange. This is due to the fact that the seven-meter halls are covered with wooden rafters with suspended ceiling coverings attached to them. For this reason, there are no columns or pillars supporting the ceiling. This religious building is one of the few in which the ceilings in Ayvan and the prayer hall are decorated with uniform ornamental patterns with a predominance of green and red shades. The interior decoration of the wall surface is decorated with an ornament with a predominance of geometric shapes.

The Saide Ahmad-Khoja is one of the madrassas where the current spiritual and educational complex is located. Here, the youth of Margilan diligently study the Koran and hadith. At the same time, the mosque opens its doors to all true Muslim believers.