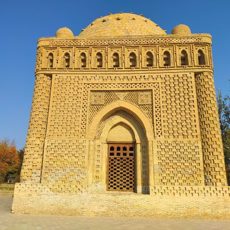 One of the oldest Bukhara architectural monuments - the mausoleum of the Samanids - was erected on a vast territory, which in past centuries served as the burial place of the deceased. According to historical information, the mausoleum appeared at the end of the X century in the territory of the cemetery. Its construction was led by Ismail Samani, the founder of the famous dynasty, which occupied the throne for more than a century, from 875 to 999 years. It was the last Persian dynasty to rule in Central Asia.

Interestingly, it was the rule of the Samanids that is considered the heyday of the economic and cultural activities of the state.

Historians claim that Ismail Samani ordered the construction of a mausoleum in memory of his father. Then the building became the tomb of other representatives of the noble family. Here Ismail Samani himself, as well as his grandson, rest. This is evidenced by the inscription at the main entrance to the building.

The mausoleum is known not only for its extraordinary beauty, but also for its impressive age. This is the oldest of all the architectural monuments of Central Asia, reflecting Islamic architectural traditions. Nevertheless, there is a deviation from the foundations of religion in the shape of the building.

The construction has a full roof, which Islam does not allow and does not approve. Similar mausoleums in Islamic history no longer exist. 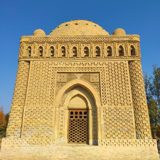