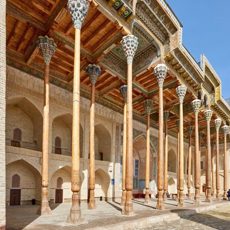 Bukhara had its own Registan, located opposite the fortress the  Ark. Unfortunately, of all the structures on this huge square of Bukhara, only the Bolo-House complex has managed to survive to our time. It was built at the beginning of the XVII century by order of Emir Shahmurad, who at that time was the ruler of Bukhara. The emir sought to prove to the inhabitants of the city that he was an ordinary person. Therefore, he wanted to erect a public mosque on the Registan, which he personally was going to attend every Friday.

The name of the complex is translated into Russian as "Children's pond." This is due to the fact that Bolo House was used as a source of water. Practically throughout Central Asia, there were problems with the availability of drinking water. Because of this, it was necessary to build artificial reservoirs (houses) that could supply life-giving moisture to all residents of the city. Water carriers scooped up water in ponds and carried it for a fee to the bazaar, hospitals and residential areas.

This trend of water distribution continued in Bolo House until the advent of Soviet power. The new government has forbidden residents of the city to use an artificial reservoir to avoid massive diseases from stagnant water. But the local population continued to use this water according to the old habit, so we had to completely drain this reservoir.

The mosque has managed to survive to the present day and still on Fridays accepts everyone who wants to pray. The building itself still has an elegant and luxurious look (do not forget that it was built for the ruler himself), which makes it one of the most popular attractions of modern Bukhara. For more than three centuries, the building has been decorated with twenty wooden columns with elaborate carvings that confidently support the ceiling of the mosque. Residents of the city call Bolo-House nothing more than “a mosque of forty pillars”. This name was given to this complex for twenty columns and their reflection in the reservoir.

Near the mosque is a minaret, which was built a little later. It is made in an elegant style, and also successfully combines the luxury and miniature of Asia. For a rather long time, the minaret was slightly tiltedl. Many compared it to the famous Leaning Tower of Pisa in Italy. But after the reconstruction, the building was thoroughly strengthened and installed strictly at a vertical angle. 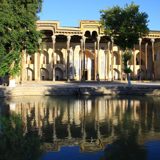 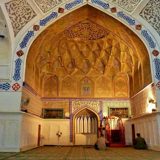