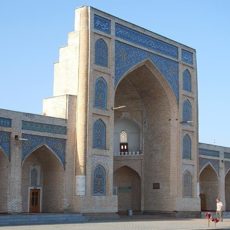 The Norbut-biy Madrasah is one of the earliest surviving buildings of the Kokand Khanate of the Norbut-biya madrasah (second half of the 18th century), built on Chorsi Square, in which students received higher spiritual education. This one-story building of a symmetrical courtyard composition represents a rectangle with cylindrical towers at the corners. A square courtyard with brighting corners is surrounded by vaulted residential chambers-hujras. The main entrance, allocated by the portal, is oriented to the north.

A mosque with a dome on intersecting arches and a cylindrical drum cut by twelve lancet windows and a darskhon was built on its sides.
The building, built of burnt bricks, has almost no decoration. The brickwork of the facades is exposed, the interiors shine with white ganch stucco. The hall of the mosque with a stalactite domed cornice and star-filled mihrab looks somewhat more elegant than darskhana. The front doors are decorated with a simple geometric pattern, the interior of which is filled with a shallow carved floral ornament.
The shape of the portal and the space-planning solution of the madrasah resemble similar monuments of Bukhara. It is possible that Bukhara masters took part in the construction of the Kokand madrasah, and the influence of the Bukhara school of architects was reflected in this building. There is a legend among the local population that the Kokand ruler forcibly attracted the construction of Bukhara architects who designed the chimneys in such a way that they did not work. So the Bukhara builders, having deprived the building of heating, which they managed to find only with the onset of cold weather, took revenge on the khan.