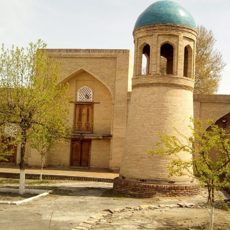 Miyön-Hazrat Madrasah, or Miyön Ahat, was built at the end of the 18th century in the southern part of the city. Miyon Akhat was from Peshawar (Pakistan), where, as his great-grandson Abdurahman told us, when he met the merchant Abdusamadbay, he and his family moved to Kokand. The main entrance to the madrassah - on the western side of the southern courtyard - is  a portal-domed. Darvozahona with wooden gates decorated with carved ornaments by local craftsman Iskander Khoja.

Residential buildings are closely adjacent to the madrasah from all sides. Residential chambers were built around the perimeter of the southern courtyard, only in the southern part was a multi-columned mosque square in plan, with a flat beamed ceiling. Here, in the southeast corner, a small minaret has been preserved. The rest of the courtyards - eastern and western - are also surrounded by hujras. In the eastern part of the madrassah, aivan was built (now lost), and in the western part a training room was built. Here you can observe various constructive types of floors: arches, domes and flat girders. The facades of the madrassah with exposed brickwork are decorated with a rhythmic row of pointed  shallow niches. The interiors are plastered with ganch.