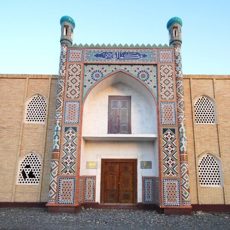 To the west of the Jami complex is the Madrasah of Kamol-Kazi, a Muslim institution of higher learning built in the mid-19th century, including a classroom (darskhona), small residential chambers (hujras) and the mosque aivan. In general, they make up a yard asymmetric composition. Particularly noteworthy is the entrance (darvozakhona), highlighted by a decoratively decorated portal with cylindrical towers at the corners and towering dome lights.  At the madrasah, only the entrance part is richly decorated. The portal is completely covered with mosaic tiled ornaments, where the geometric pattern is combined with Arabic inscriptions. A two-tier volume was erected behind the portal, the upper part of which, covered by a tetrahedral dome, served as a training room. The darskhon's balcony overlooking the main facade is a kind of visor above the entrance to the square courtyard, which is surrounded by hujras and a mosque. The latter is a four-columned, opened to the east aivan with girder ceilings. The interiors are finished with ganch, and the exterior walls, lined with burnt bricks, as in many other public buildings, are left without plaster.