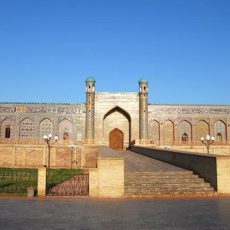 Khudoyar-Khan Palace  - the main architectural and historical attraction of Kokand. The majestic and original building serves as a reminder of the last ruler of the Kokand Khanate Khudoyar. Travelers are most impressed by the appearance of the palace - monumental and luxurious, as if it came down from pictures of oriental tales.

The total area of ​​the Khudoyar Khan Palace is 4 hectares, the initial length is 138 meters and the width is 65. Due to the high 3-meter foundation, the building is equipped with a long ramp.

The attraction belongs to the Central Asian architectural style. Such involvement is evidenced by a high portal with an entrance arch, huge carved doors, four minarets (two near the entrance and the same number on the sides of the building), lined with carved blue tiles. The entrance to the building is decorated with skillful Arabic script glorifying Khudoyar Khan. A harmonious addition to it is the intricate pattern on the doors.

An interesting fact: the construction of the building began long before the reign and even before the birth of Khudoyar. The order to erect the palace was given by the mother of Khan Muhammad Alikhan (the eighth ruler of the Uzbek Ming dynasty) Nadir. However, she failed to complete what was started for unknown reasons. Construction resumed only in 1863, and was completed in 1871.

It is known that the whole process was led by the architect Ubaidullo Muhandis. It was a large-scale construction project, which involved 16 thousand people. Finishing was entrusted to the most highly qualified specialists of that time from the city of Kashgar, for the ceramic tiles that were used to decorate the facade, the best artisans from the ancient center of ceramics - the city of Rishtan, were responsible.

The result exceeded all expectations - 7 courtyards and 119 rooms, the interior decoration of which was in no way inferior to the external. The most impressive were the reception and throne rooms, in which the treasury and arsenal were stored. The beauty mansions of the ruler and the rooms of his wives were not inferior in beauty. The walls of these rooms were decorated with painted drawings and various pictograms.

No less luxurious rooms were in the children of Khudoyar. The interior decoration of most rooms is characterized by openwork carvings, gilded cornices, painted with tempera paints, wall and ceiling panels, which contain extracts from the Koran and sayings of ancient philosophers. Much more modesty was distinguished by small rooms for captive slaves.

The entire palace complex was surrounded by a fence. To this day, however, like most rooms, it has not been preserved (only 19 rooms and two courtyards remain).

The good news: you can admire the landmark not only from the outside, but also from the inside. From 1925 to the present time, the Kokand Museum of Local Lore has been operating in the building. The institution has about 30 thousand exhibits that reflect the history of the city, its identity and culture.