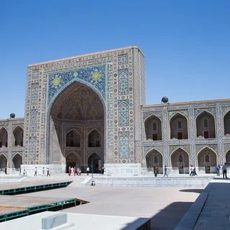 In the heart of Samarkand is a single architectural complex with the Ulugbek madrassa as well as the Sherdor madrassah, located in the Tillha-Kori madrassah, the newest building in Registan Square. The Gilded Madrasah, thus translated from the Uzbek language of Tilla-Kori, was built on the orders of the ruler of Samarkand Yalangtubia Bahadura: according to his plan, the madrassa was to complement  the architectural image of Registan.

The Northern part of the square was chosen as the place of construction, where in the XV century there was a Mirzoi caravanserai, from which only fragments of the walls and Foundation remained by 1646. The construction of the Tillya-Kori madrasa lasted for almost 15 years, and was completed by 1660. Yalangtushbiy Bahadur himself had already died by that time, having never seen the realization of his idea.

Tillya-Kori madrasa was a remarkable building with a number of features. One of them is a richly gilded facade, thanks to which the madrasah received its euphonious name. In addition, there is a Cathedral Juma mosque (Friday mosque) on the territory of the madrasa. The surfaces of its walls and arch, as well as the facade of the madrasa, were decorated with gold applied by the "kundal" method (polychrome painting with glue paints with gilded relief details of the ornament). The mosque at the Tillya-Kori madrasa was built specifically for students who studied here: they could perform daily prayers without leaving the school.

The appearance of Till-Kori was dictated by the Bukhara architectural tradition, and therefore the proportions of Ulugbek and Sherdor madrassas were not repeated in it. The madrasah building is one-story, unlike its two famous two-story "neighbors". Despite this, against their background, the Tillya-Kori madrasa does not look low, due to the fact that the compositional task was successfully solved. The wings of the main facade of the madrasa are elongated and rounded, so that it perfectly embodies the role of the Central element of the ensemble, and also sets off the beauty of the other two more monumental buildings of Registan Square. An interesting fact is that the til-Kori madrasa was the last major architectural monument in Samarkand, which is characterized by such a diverse and rich color cladding.

A major earthquake of the early XIX century destroyed the entrance portal of the madrasah, which was already tilted by that time. Unfortunately, the order given by Emir Haidar to carry out restoration work did not help to preserve the tile lining: the portal was rebuilt without it, and the gilding was not preserved. Soon, almost all the facade cladding was lost, and in the 20s of the XX century, a number of efforts were made to save the surviving fragments of the decor. After several years of restoration work, the Tillya-Kari madrasa was restored, and in 2001 this outstanding architectural monument was included in the UNESCO world heritage List. 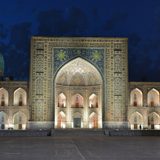 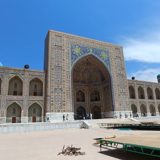