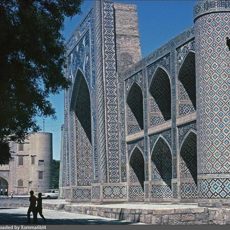 Madrasah, erected in 1622, is located in the east of Lyabi House. From the very beginning, this building was conceived by the  Bukhara nobleman as a caravanserai. Having built it at the beginning of the 17th century, the vizier invited the local nobility to the opening. The most honored guest was Imamkuli Khan, who, to everyone’s surprise, proclaimed the new building not a caravanserai, but a madrasah. In order for the building to correspond to the new rank, it needed to be reconstructed and remodeled.

Another floor was added to the one-story structure, equipped for students ' living. Also, a portal and loggias appeared in the design, and a pair of towers were added to the facade. The madrasa is interesting because the main room for conducting training sessions in the building has not been built.

On the portal there are elegant images of animals made of mosaics. Among them are a pair of Semurg happiness birds flying up to the Sun. These mythical feathered creatures hold deer in their strong clawed paws. The portal is also decorated with a sacred inscription praising Allah and Muhammad, his prophet.

Since the beginning of the 90-ies of the 20th century to this day, the Nadir Divan-Begi madrasa is among the architectural monuments protected by UNESCO.

On the opposite side of the madrasa stands the khanaka, named after the same vizier. This structure was built in 1619-1620. This is a building consisting of many buildings. The main part of it is a vast elongated portal, decorated with epigraphic ligature on the sides. Hujras are located on both sides of the portal. The Central entrance group of the khanaka is decorated quite simply and modestly, in a classic style-a decor of flowers.

Khanaka Nadira Diwan-Begi has been attracting locals and tourists to its walls for many decades. The reason is not only in a good location, but also in the stunning acoustics of the Central hall. The beautiful sounds that visitors to khanaka hear inside the building are simply fascinating in their mystery and depth.

The madrasah is separated from the khanaka by a huge artificial pond, which has the shape of a rectangle, stretching from East to West. It's house of Nadir Divan-Begi. Its coast has the appearance of large steps of a bright yellow hue. The main material for the construction of these steps was limestone.

Today, the Nadir Divan-Begi ensemble is a favorite place for indigenous citizens and guests of Bukhara. The atmosphere here is literally saturated with antiquity. The native traditions of the Uzbek people are read in every detail. 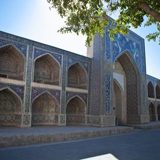 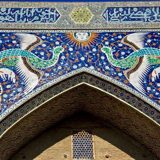