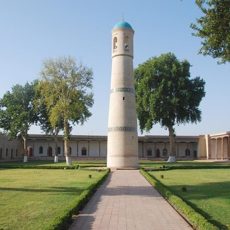 Jami Mosque - the main cathedral mosque of Kokand was built in 1818, during the heyday of the Kokand Khanates. It was then that a large number of new buildings appeared in the city, a citadel was built, many mosques and other religious buildings were erected, which are the sights of the modern city.

Today, the Jami Mosque in Kokand is inactive. The building is an important architectural monument, and inside it you can visit a small museum of applied art, the exhibition of which presents objects of national life, carpets, clothes, ceramics of various periods.

The Jami Mosque in Kokand impresses with its size: its area, together with an extensive courtyard, is 97 m by 25 m, and the length of the facade of the mosque is more than one hundred meters.

The mosque is a rectangular structure - a khanaku, surrounded on three sides by an aivan, on the periphery were located the training rooms and hujras of the Jami madrassah, operating here until 1918.

The main value and pride of the Jami Mosque are the unique columns and ceiling of aivan, which are separate works of art. The arch of the aivan is supported by 98 intricately painted wooden columns of gold from a solid variety of elm - a unique species of wood, which is called "stone" because of its strength, hardness and durability. Ten of these columns are inside the khanaki.

The columns are carved, crowned with stalactite capitals and decorated with intricate floral and geometric patterns. Over 200 usto (masters) invited from Ura-Tyube (Istaravshan, the territory of modern Tajikistan), an ancient city, one of the largest centers of craft and wood carving in Asia, worked on decorating the main mosque of the Kokand Khanate. The bases for the columns are marble slabs that were delivered from India specifically for the Jami Mosque. Skillful craftsmen created truly unique patterns that glorified Jami's decoration far beyond Kokand.

Today, the left wing of the building is occupied by a bakery - that is why in the courtyard of the mosque Jami always smells of freshly baked muffin, which often causes surprise and affection for tourists.