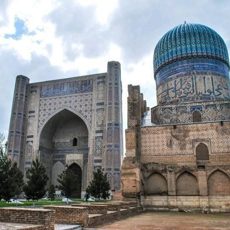 Bibi Hanim is the largest mosque in Central Asia, which is a rather significant monument to the entire Islamic world. Only standing at the gates and majestic walls of Bibi Hanima, you can fully feel the splendor and grandeur of this architectural complex

The way to the mosque is a massive portal, which received the mysterious name "milky way". Immediately behind it, the traveler can see the huge monumental main mosque.

The history of this famous and majestic mosque in Samarkand has several variations. In this case, it is difficult to distinguish the truth from fictional legends and folk stories. According to one main version, the majestic Bibi Khanim building was built by Tamerlane and named after his wife's mother. This version is confirmed by the notes of the famous Spanish traveler of the time, Rui Clavijo.

According to the second version, this complex was built by Timur's wife named Bibi Khanim, who wanted to give her husband an unusual gift when he was on another trip. It is alleged that she managed to build only one of the minarets before the arrival of the Tamerlane. They were simply beautiful in their grandeur and surrounded by dazzling white columns. But the main arch, which was to serve as the Central entrance to the mosque's courtyard, was not yet completed. The reason for this trouble was a huge passion for Tamerlane's wife on the part of the young architect. He did not want to finish building the mosque in order to spend more time with Bibi Khanim. The Emir's wife did not share the feelings of the enamored architect at all. On the contrary, she was completely furious at this delay in construction, because Tamerlane and his army were already quite close to Samarkand.

After much persuasion, the young man demanded only one kiss from Bibi Khanim. In this case, he promised to finish the construction in the shortest possible time. Timur's wife long resisted the impudent young man and strongly discouraged him from this act. She even offered him countless luxurious beauties from her surroundings, but the architect stood firm. Desperate, Bibi Khanim allowed herself to be kissed on the cheek. This kiss was so passionate that it left a clear mark on the delicate skin of the Emir's wife. Returning home, Tamerlan noticed this trace and ordered to seize the scoundrel. But by this time the young architect was already very far from Samarkand.

After a long study of all the documents and surviving manuscripts, researchers and historians agreed on their version of the origin of this amazing architectural complex. Their official version says that Bibi Khanim was built by Tamerlane himself, after his return from a very successful campaign in India. When he returned, he wished to build a huge mosque and give it the name of his wife. The construction of the mosque began in may 1399. Tamerlan himself chose the location for the development. He attracted numerous architects and craftsmen from many countries to build this miracle of architecture. More than 500 people were engaged in the extraction of stone for construction in quarries, and about a hundred Indian elephants delivered this stone to Samarkand. The Titanic work of all those who were involved in the construction of Bibi Khanim made it possible to build the mosque in just 5 years, which is a very short time for that time. It is also worth considering the scope, grandiose size of the structure and its complex decor.

Surprisingly, Tamerlan did not like the mosque after its construction was completed. In full indignation he gave orders to arrest the leaders of the construction and to conclude them in prison. It is possible that Timur was right in his assessment of the construction, because even during his reign in the mosque, stones with expensive decorations were often rained on the heads of worshippers of various sizes. But the sheer size of the mosque, its architectural features and ingenious decor are admirable even in our time.

In its original form, the Bibi Khanim complex had a huge gallery of almost 500 marble columns that connected all the buildings together. The main Eastern portal was 33 meters high and 45 meters wide. The entrance arch to the main mosque building itself was decorated with massive metal gates and elaborately carved marble slabs. Each corner of the rectangular structure had its own multi-tiered minaret, extending high into the sky. Of the original religious complex, only a few structures have survived: the milky Way portal, the buildings of the main and two small mosques, and the only minaret. 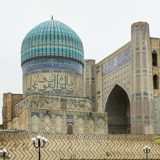