Museum of Victims of Political Repression 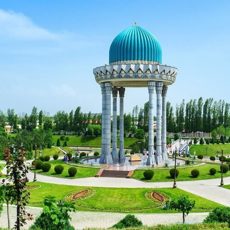 The memorial complex "Shahidlar Khotirasi"(translated from the Uzbek language - "Memory of victims of repression") occupies a vast territory opposite the Tashkent TV tower and is a Park recreation area on the Bank of the Bozsu channel. The total area of the memorial is 17 hectares. From afar, the memorial rotunda, 27 meters high, consisting of eight marble columns and topped with a rounded turquoise dome, attracts the attention of passers-by.

From afar, the memorial rotunda, 27 meters high, consisting of eight marble columns and topped with a rounded turquoise dome, attracts the attention of passers-by. Under the dome, exactly in the middle of the rotunda, lies a memorial stone-a tombstone, oriented exactly to Mecca. It is engraved with an inscription in three languages (Arabic, English, and Uzbek): "the Memory of those who died for their Fatherland will live forever." The majestic rotunda is surrounded by neat lawns with lush flower beds.

A little further away is the building of the Museum "Memory of victims of repression", built in the Eastern style, surrounded by carved wooden columns with national ornaments.

The Museum's exposition is dedicated to the victims of Stalin's repressions and other periods of political terror, which resulted in the death of thousands of innocent people, unjustly convicted, exiled to camps, deported or shot. It contains old photographs and historical documents that testify to unprecedented mass actions aimed at destroying a huge number of people, and their best representatives: outstanding poets, scientists, and actors who somehow became objectionable to the ruling regime. During the Stalinist repressions, about 14,000 people were shot and 118,000 were sent to camps, which was tantamount to death due to unbearable living conditions.

The place of the memorial was not chosen by chance – it was here, on the Bank of the river, that the condemned were brought at night, and the terrible sentence was carried out under the sound of trains passing nearby. The bodies of those shot were dumped directly into the river, which carried them far beyond the city limits, or buried in common graves that were discovered later, during the construction of the new Tashkent TV tower.

Nothing now reminds us of those terrible events in this beautiful, quiet place, where adults and children come to walk on warm summer evenings, and newlyweds come to lay flowers at the foot of the memorial. The smooth paths of the Park attract teenagers who are famously riding on roller skates and skateboards, and the serene panorama that opens on the territory of the complex asks you to capture all this splendor on a photo or video camera.

In September 2013, a guide was published: "Witnesses of Stalin's repressions in Tashkent: architecture and people". A presentation was held at the Museum "Memory of victims of repression", which presented options for routes for schoolchildren, students and foreign tourists, as well as electronic versions of the guide. In the future, this tour is planned to be introduced on a regular basis among educational institutions and included in tourist routes in Tashkent. 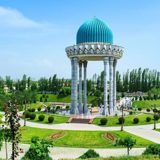 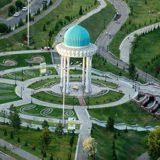