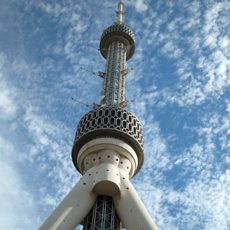 Visiting Tashkent, it is impossible not to see the Tashkent TV tower. It is visible from almost every point of the city, its height reaches 375 m. This structure is the tallest TV tower not only in the capital of Uzbekistan, but also among all cities of Central Asia. Today, the city and the TV tower have come to be perceived as a whole, so it is successfully combined with urban views.

Of course, the main purpose of this facility is television and radio broadcasting. This function has been performed for more than two decades. The broadcasting center's equipment consists of the latest telecommunications equipment from world-famous manufacturers. more than a hundred highly qualified specialists work here, providing radio and television broadcasting 24 hours a day. The TV tower is the largest broadcasting center in Central Asia, its coverage area is Tashkent, Syrdarya and Tashkent regions, as well as some regions of Kazakhstan.

At the Tashkent TV station at the level of almost a hundred meters there is an observation deck, from here you can view any of the districts of the city, enjoy views of the capital of Uzbekistan. To visit the circular observation deck, you need to use a high-speed Elevator (there are three of them on the TV tower). There is also a restaurant with an original interior, it has two halls-the first is red (at the level of 104 m), the second is blue (the height here reaches 98 m), at the same time both halls can accommodate about 120 people. Visitors to the red hall can enjoy European cuisine, while the blue hall serves Eastern cuisine. A special rotating platform serves as the floor in both rooms. It makes a 360 C turn within an hour, so visitors to the restaurant have the opportunity not only to eat in a pleasant atmosphere,but also to explore the capital in the city. 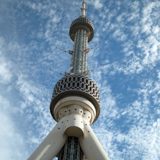 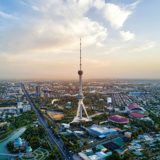