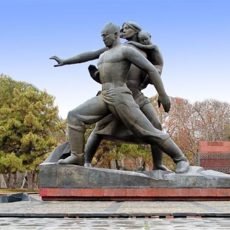 Among the many monuments decorating the streets and squares of Tashkent, the monumental complex “Courage” deserves special attention. It is dedicated to the events of almost half a century ago, which left a deep mark in the history of Tashkent. On a granite podium there is a cube of black labradorite, on one side of which a date is carved: April 26, 1966.

On the other hand, the carved watch is a face with arrows indicating a time of 5 hours 24 minutes. On this day, in the early morning hours, the city was hit by an 8.3-magnitude earthquake. The cube split into a crack, which symbolizes the destruction of the earth's sky and continues to the foot of a bronze sculpture depicting a woman holding a child and a man protecting their breasts from the impact of the elements. The background for the monument is relief compositions, telling about the restoration of Tashkent.

The Tashkents bravely met the blows of the elements. A day later, they moved into large tents on the sidewalks and lawns of the city squares. They had to survive more than a thousand aftershocks of various forces. The water supply system worked and electricity was supplied without interruption, thus avoiding the usual epidemics of natural disasters.

Builders of all soviet republics took part in the restoration of Tashkent. A few months after the earthquake, the first settlers received new houses. Entire residential areas have grown on the outskirts of the capital, and neighborhoods, such as those surrounding the Monument of Courage, have been restored in the ruined city centre. Today this monument symbolizes peace and well-being in the homes of Tashkent residents. Surrounding the Square ring of children's voices, and the bride and groom bring flowers to the foot. 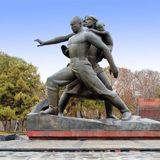 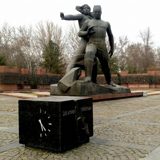