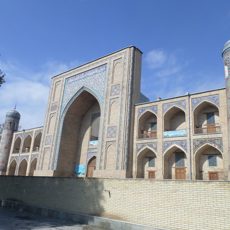 Madrassah Kukeldash is the largest madrasah and one of the most famous historical monuments of Tashkent. It is not difficult to find, it is located in the historical heart of the city - in the area of ​​Chorsu Square and Tashkent Registan. In the 9th and 10th centuries, it was here that the Kesk fortress gates were located, one of the three city gates.

The central architectural ensemble - Registan was in every major city. The buildings that make up this ensemble are distinguished by exquisite architecture, monumentality, original design and unusual decoration. Tashkent Registan is not an exception, it's enough to look closely at the Kukeldash Madrassah.

Madrassah Kukeldash was built in the 16th century (1570) during the reign of the Sheibanid dynasty by the vizier, close to the Tashkent sultans Barak Khan and Dervish Khan. The vizier wore the nickname "kukeltash" ("kukeldash"), which in translation means "khan's milk brother".

Madrassah Kukeldash - one of the largest madrassas of the XVI century, preserved in Central Asia. It is built of burnt bricks according to the traditional principle for the madrassah: a large inner courtyard surrounded by Hujra cells, darshan (study room) and a mosque. The facade is opened by an elegant entrance portal with a height of almost 20 meters (peshtak), two-level balconies with invariable corner towers - guldast. The portal has preserved the remains of the decor - majolica and glazed bricks. On the windows of madrassas there are special sun-protection grilles - panjara, in the patterns of which an attentive visitor can see the names woven into the drawing, sacred to any Muslim - Allah and the Prophet Muhammad.

Madrasah Kukeldash was repeatedly repaired and restored, so the current appearance of the building is significantly different from the original, although in terms of size and architectural design this monument of ancient architecture is not inferior to the famous madrasahs of Bukhara and Samarkand.

Like any madrassa, Kukeldash Madrassah was an educational institution. However, during several centuries of its existence, the Kukeldash madrassas not only fell into disrepair. What did not "see" madrassas throughout its long history. For example, in the XVIII century there was a caravan-shed, in which the visiting merchants stayed. At this time, the destruction of the madrasah towering towers - guldast. Later, in the XIX century, the Kukeldash Madrassah was a fortress of the Kokand rulers. During the Tashkent uprising defending city residents were fired from guns located on the portal of the Kukeldash Madrassah. In the thirties of the 19th century under Bekler-Bek, the blue domes and the second floor of the cells were crowned with bricks for the construction of other buildings and later restored by the Tashkent masters.

Kukeldash Madrassah has many legends connected with it. For example, it is believed that for a long time it served as a place of execution - from the highest parapet of the central portal to the adjacent Kukeldash Madrassah Sheikhantaur street was thrown in bags of unfaithful wives, which should serve as a clear example of the advantages of a highly moral life. Another legend tells of an unusual sprouting pistachio tree, which for several hundred years grew right on one of the domes of the madrasah and was considered sacred.

In the XIX century, the Kukeldash Madrassah suffered from two earthquakes - 1868 and 1886, the entrance portal portal was destroyed and partially restored only in the 60s of the XX century.

In the middle of the XX century, during the Union in the building of Kukeldash Madrassah there was an exhibition actively propagating atheistic way of life. It's easy to imagine that against the backdrop of the finest sample of Islamic architecture, the exhibition looked rather unconvincing. Until recently, the madrasah had a museum of Uzbek national instruments. In the years of Independence, the building of the Kukeldash Madrasah was completely restored according to the preserved photographs of the 80s of the XIX century. Today it is a majestic two-story building (legends say that it was once a three-story building, although it is difficult to prove it today) - the dominant architectural ensemble of the Tashkent Registan. After the restoration, it was decided to return the Kukeldash Madrassah to the role of the spiritual educational institution. From the corner towers of the madrasahs, the muezzins call on believers to pray, on the left side of the building classes are held for the students living in the hudjras, in the right - religious services are held.

On one of the walls of the Kukeldash madrassa there is engraved an inscription reflecting the destiny of the architectural monument: "death is the inevitability of man, but the works made by him remain forever".