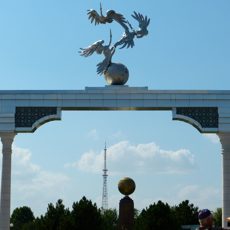 Independence square (Uzbek for "Mustakillik Maidoni") is the main square of Uzbekistan, which is located in the heart of Tashkent. Citizens often gather here to celebrate national holidays, on weekdays and weekends you can see the newlyweds, and in General, there are always a lot of people on the square and there is a pleasant atmosphere. The Park area is located close to Ankhor — the city's river channel.

The park is located near Anhor, the city's river canal. Along the square you can slowly and pleasantly walk to the noise and splash of the most beautiful fountains seven meters high. Majestic cypress alleys also deserve special attention - you just have to see them with your own eyes.

Mustakillik Square is a central tourist attraction in Tashkent with a complex history dating back to the 19th century.

The general reconstruction gave the square a modern look, the buildings were restored and landscaped. The first thing people see at the entrance to the square is the arch of "kind and noble intentions", which is officially called "Ezgulik". The structure consists of sixteen columns of light marble and is connected by an overlap on which the figures of storks were installed - a symbol of peace and tranquillity.

The alley begins with an ensemble of columns on both sides of which are the most impressive fountains and park areas. The alley leads to the Independence Monument and the Mourning Mother Monument. The figure of a woman with an infant in her arms was installed at the foot of the monument in 2006. The monument of the Mourning Mother symbolizes the Motherland and its care for the children - the Uzbek people.

On the left side of the square are the Senate (until 2003 it was in its place was the building of the library named after Alisher New), the Cabinet of Ministers of the Republic of Uzbekistan, various ministries and other administrative buildings. Opposite the buildings of the government apparatus organized a forest park zone, on the territory of which is the Walk of Remembrance and Glory in memory of those who died during World War II.

To the left and right of the alley are galleries decorated with carved granite, and wooden columns. Fourteen steles are fourteen regions of the country. On these plaques are the book of memory, where all the names of the brave Uzbek peoples who gave their lives, protecting their homeland from fascist invaders, are written in gold. At the end of the alley is a monument to Independence and Humanism. People still remember the bloody price paid by their ancestors for their children to be free, so the flowers laid at the monument can be seen all year round. 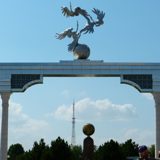 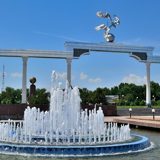