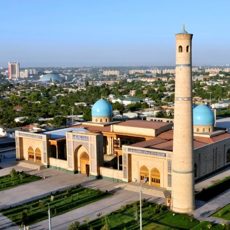 One of the most striking examples of a neat attitude to architecture and the display of interest in history in the country can serve as the ensemble of Khazret Imam, which was built in the 16th century. Because of natural disasters, wars and simply because a lot of time has passed, some of the buildings of the ensemble lost their original design. Not long ago, after the restoration of some old buildings, the construction of additional buildings and ennobling of nearby zones, the ensemble appeared before its visitors in all its striking beauty.

The name of Khazret Imam was given to him by one of the earliest and most revered imams of the city, whose name was Aboubekr Muhammad Kaffal Shashi. He had the reputation of an excellent scientist who received excellent knowledge in madrassas, was a follower of the historian At-Tabari and had excellent knowledge of the hadith and the Koran and the law. There are some results of his work, as well as information about his skills in creating excellent castles, which is why he received the nickname Kaffal, which in translation means "master of the castle." According to legend, he also created an amazing beauty and a striking castle, the key for which weighed more than a kilogram.

Abubekr Shashi had considerable respect among his people, and after he died at the end of the tenth century, his grave became a place for pilgrimage. In the 16th century, the mausoleum was erected over the site of his grave, and the adjacent district of Tashkent was named Khazret Imam, which translates as "Great Imam". Despite this, the main building of the complex in those days was Madrasah Barak-khan XVI century. It was customary to include several mausoleums, as well as a library that was rich in manuscripts of poets from the East.

The Tillya Sheikh Mosque, which was erected in the middle of the XIX century, is also considered a component of the ensemble Khazret Imam.

The nearby square was famous because it was here that the famous authentic copy of the Qur'an of Khalifa, which belongs to the seventh century, was preserved. This book is of special value, because on certain sheets the traces of Osman's blood were saved. This book was transported to Samarkand, but a little later the valuable book was transferred to the repository of the books of the emperor in Russia. After long travels, in the 1920s this sacred to all Muslims book was transported to the capital, where it was located in the historical museum. In the nineties of the last century, at the suggestion of then-incumbent President Karimov, the Koran was handed over to the Muslim government of the country.

Not so long ago a new representation of the Spiritual Administration was erected near Barak Khan, as well as a museum for a new relic, where it still lies today. Also there are about twenty two thousand books with Muslim themes.

The Hazret Imam Ensemble is a spiritual center of Tashkent and Uzbekistan in general. Just here, not far from the mosque-namazgoh is the publishing house of the newspaper, which is called "Ray of Islam", and a magazine called "The True Way". It also houses the building of the Al-Bukhori Institute, which was created almost fifty years ago and during this time was substantially rebuilt.

Another new structure that decorated the whole complex was the Khazret Imam mosque, which was built in accordance with the rules of the 16th century.

The buildings of the ensemble stand out from a great distance, and their grandeur allowed to create unusual conditions in this area of ​​the city. In particular, everything looks incredibly beautiful at night, when the illusion of a floating fairy-tale mirage appears with the help of illumination.