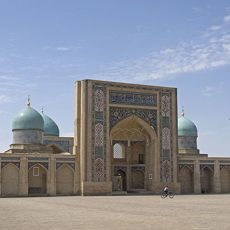 Madrasah Barak-Khan, located in Tashkent (Uzbekistan), is the repository of one of the most valuable relics of Islam - the Koran of the Caliph Osman.

In addition, the grandson of the great Ulugbek built in the 16th century, the Madrassah is also famous for its rich library of oriental manuscripts, and also because until the middle of the zero years of the 21st century the Spiritual Directorate of Muslims of Central Asia was located here. Barak-Khan is the national nickname of the founder of the Mosque of the Tashkent ruler Navruz Ahmadkhan, the grandson of Mirzo Ulugbek, which translates as "Lucky Khan".

Madrez Barak-Khan is located in the old district of Tashkent - here you can plunge into the past, imagine that you are in the eastern fairy tale. It is enough to come to Khast Imam Square in Zarkainar Street, east of Chorsu bazaar.

The place for the construction of the Madrassah was chosen not accidentally - nearby was Mahali Hastim - the center of scholars, philosophers and scholars of Islam.

Today in Madrass there are workshops, in which copyists of the Koran and masters of national crafts work - chasers of brass and copper products, woodcarvers.

The Qur'an of the Caliph of Osman, also called the Ottoman (Ottoman) Qur'an, was written in the middle of the 7th century and is the primary source of the sacred book of Islam. This rarity is stored today in a special room Madrasah and is a huge ancient manuscript, including 353 parchment leaves, the cover is made of deer skin. According to the legend, the pages of the blood of the Caliph Osman, who was killed while reading the sacred book, were preserved on his pages. The importance for the Muslims of the Ottoman Koran is confirmed by the fact that all the currents of Islam, including Sunnis and Shiites, which recognize a number of religious discrepancies, are recognized as the primary source. In fact, this Quran unites all Muslims.

Initially, the Ottoman Koran was kept as a sacred relic from the Caliphs - in Medina, Damascus, and then Baghdad. But since the 13th century, when the Mongols captured Baghdad and executed the Caliph with all his approximate, traces of the Ottoman Koran are lost. Only in the 15th century the sacred book was found again. Where she was during this time, and how she got from Baghdad to Samarkand - remains a mystery. There are several versions. According to one of them, the relic was found in the days of Amir Temur, who collected a collection of ancient manuscripts in Samarkand. The Sufis of the Order of Naqshbandiya are of the opinion that the Koran was saved during the Mongol invasions by ingenious dervishes who managed to hide and preserve the shrine of Islam. In Tashkent, where the Ottoman Koran is now, there is a folk tradition that Saint Kaffal Shashi, considered one of the patrons of the capital of Uzbekistan, took the Koran from Baghdad even before the Mongol conquests, having received a sacred book as a gift from the caliph.

Until the middle of the 19th century, the Koran was kept in Samarkand - first on a giant marble stand in the courtyard of the mausoleum of Bibi Khanum, and then in the mosque of Sheikh Khoja Ahror. In 1868, after the capture of Samarkand by Russian troops, the Koran was taken to St. Petersburg and presented to the Imperial Public Library. It was in this scientific institution that the relevant expertise was carried out and the scientists established that the Ottoman Koran was indeed created in the 7th-8th centuries on the territory of modern Iraq.

The revolutionary events of 1917 again led to the relocation of the Holy Book, which for its centuries-old history has traveled from Medina to St. Petersburg: the Koran was transferred to the All-Russian Muslim Council and taken to Ufa. In the mid-1920s he was returned to Samarkand, and in 1941 he was placed in the Museum of the History of Peoples of Uzbekistan in Tashkent.