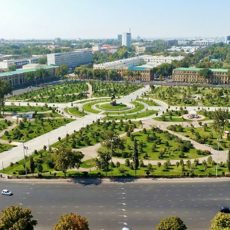 The square in the center of Tashkent, now called Amir Temur square, was laid in front of the headquarters of the Turkestan military district on the initiative of Mikhail Chernyaev and designed by the architect Nikolai Ulyanov in 1882 at the intersection of two Central streets of the new city — Moscow and Kaufman Avenue called Konstantinovsky square.

It was originally a roadway.

Initially, the place of the square was the so-called Konstantinovskaya square, which was larger than other squares of the city. This square was not paved, and therefore dusty in dry weather and dirty in the rain.

The idea of the square's architect was based on the idea of crossing two large avenues in its center-Kaufmansky and Moskovsky, which divided the square's territory into four parts and passed through it through and through. At the same time, a road ran around the square, which was joined by all the others. All four parts were covered with a grid of pedestrian shady alleys, very rational and taking into account the movement of pedestrians crossing the square in different directions.

It should be noted that these two streets, at the intersection of which the square was laid, repeated the ancient trade routes that developed in the vicinity of the city many hundreds of years ago. Moskovsky Prospekt was a segment of the caravan route to Kashgar and then to China-the silk road went from the ancient city of Chach (now an area Mingurik situated just one mile from the present Park on the continuation of a former Moscow prospect in the direction of the river Salar) and Kaufmanesque Avenue was a road leading from the citadel of old Tashkent via kuylyuk and through the fords of the river Chirchik, in the direction of Kokand, and cut the old caravan route. Thus, it can be assumed that the vicinity of this intersection has always been a kind of religious place. 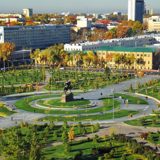 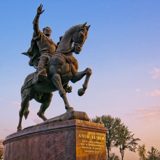