Tashkent is one of the oldest and largest cities in Central Asia. The city through which the Great Silk Road passed, and the mention of which can be traced in the 3rd century BC, as, Chash or Shash, "Stone City."

Tashkent is the capital of Uzbekistan, a city with a long history and at the same time a well-developed infrastructure.  The buildings of the 14th and 18th centuries are perfectly preserved, a large number of stunning museums that preserve the rich history of the city, ancient monuments and architecture, as well as tall modern buildings that only give the city color.  Here any tourist will find a place that he likes. 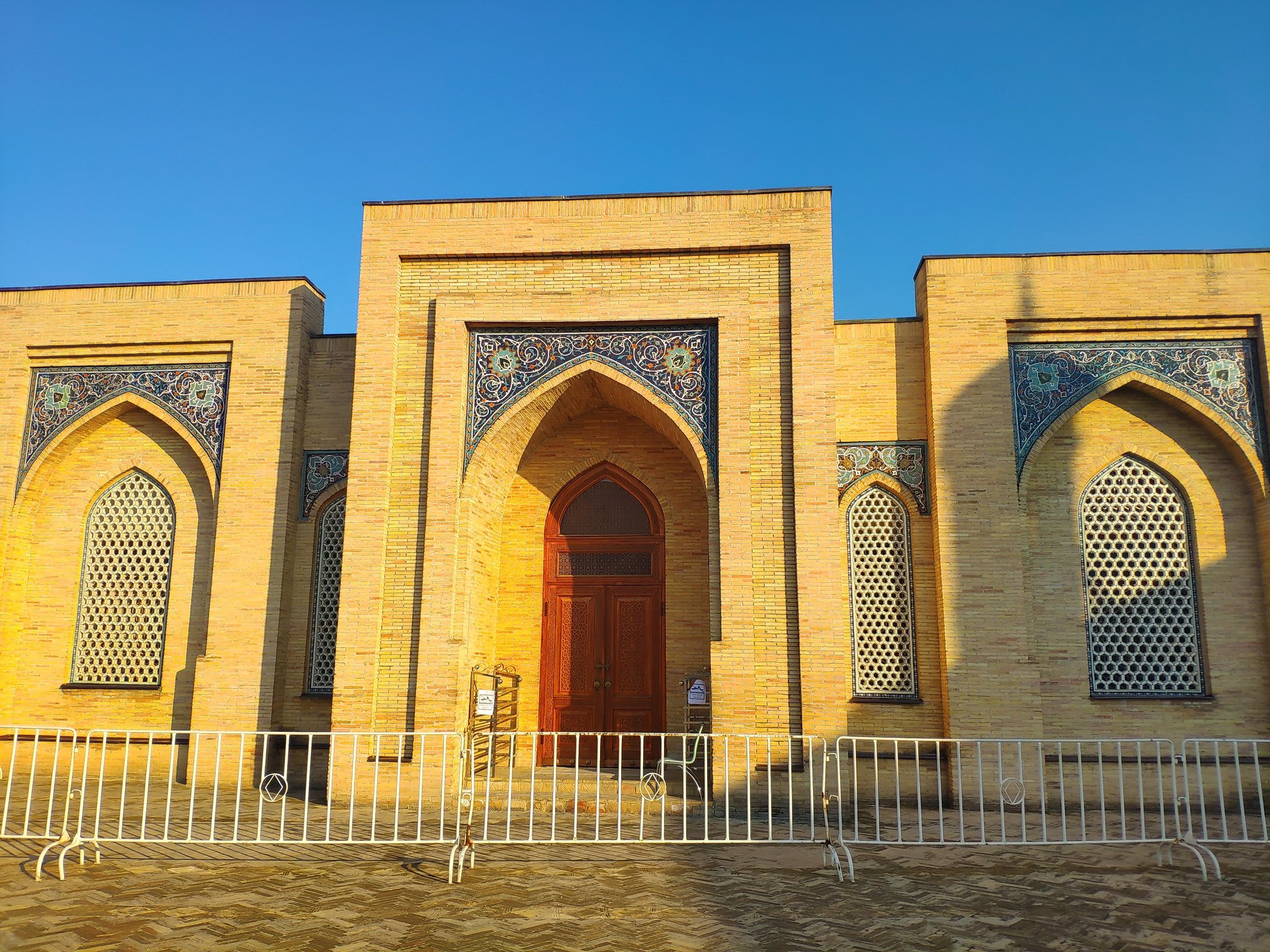 The Sheikh Till mosque, built in 1856-1857, is part of the famous historical and religious complex Hast Imam and is located opposite the Barak Khan madrasah. This still functioning mosque-Namazgoh, whose name translates as "Golden Sheikh", owes its appearance to the Kokand Khan Mirza Ahmed Kushbegi and, according to legend, keeps the Golden hair of the prophet Muhammad in its walls. More... 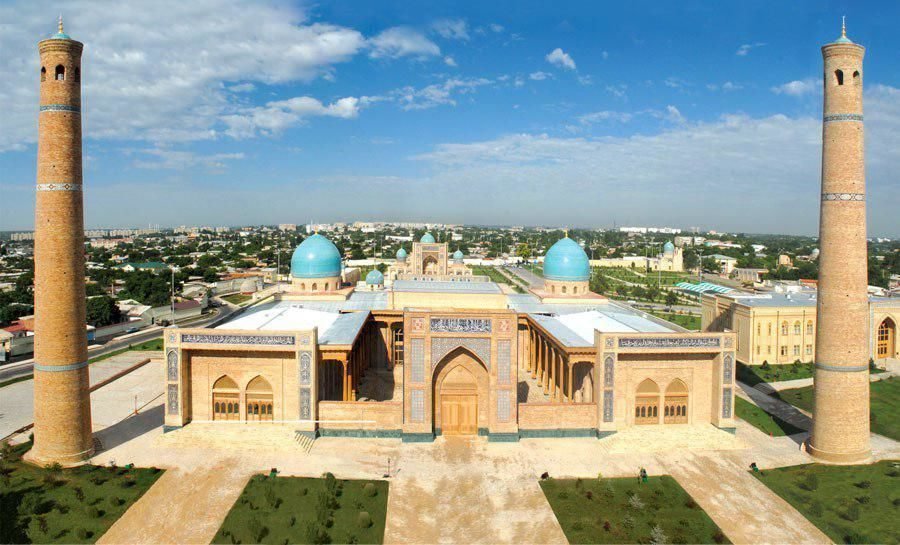 Hast - Imam. One of the most striking examples of careful attitude to architecture and interest in the history of the country is the Hazret Imam Ensemble, which was built in the 16th century. Because of natural disasters, wars, and simply because of the fact that a lot of time has passed, some buildings of the ensemble have lost their original appearance. More... 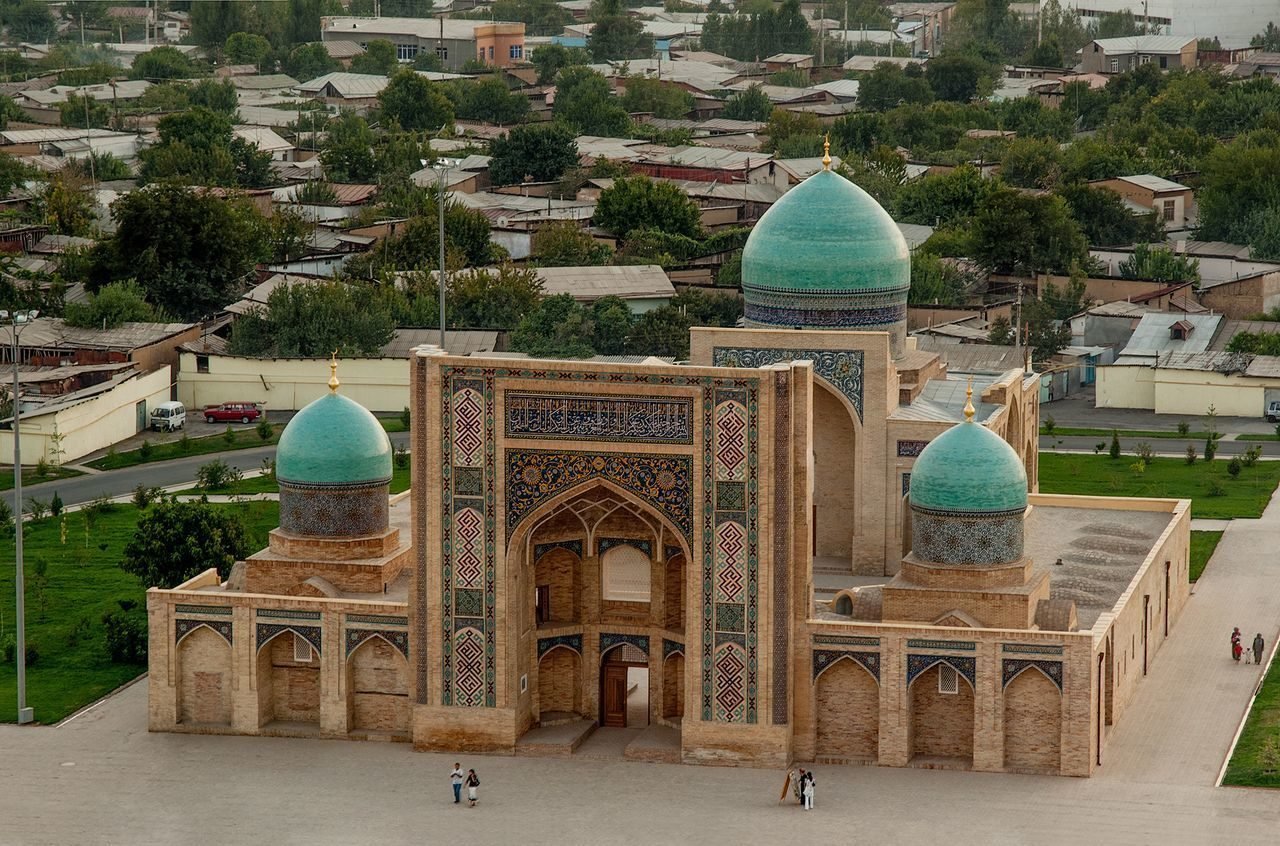 Barak Khan's madrassah, located in Tashkent, Uzbekistan, is a repository of one of Islam's most valuable relics, the Koran of Caliph Osman. In addition, the madrassah, built in the 16th century by the grandson of the great Amir Temur-Ulugbek, is also famous for its rich library of oriental manuscripts and the fact that until the mid-21st century the Spiritual Administration of the Muslims of Central Asia was in it. More... 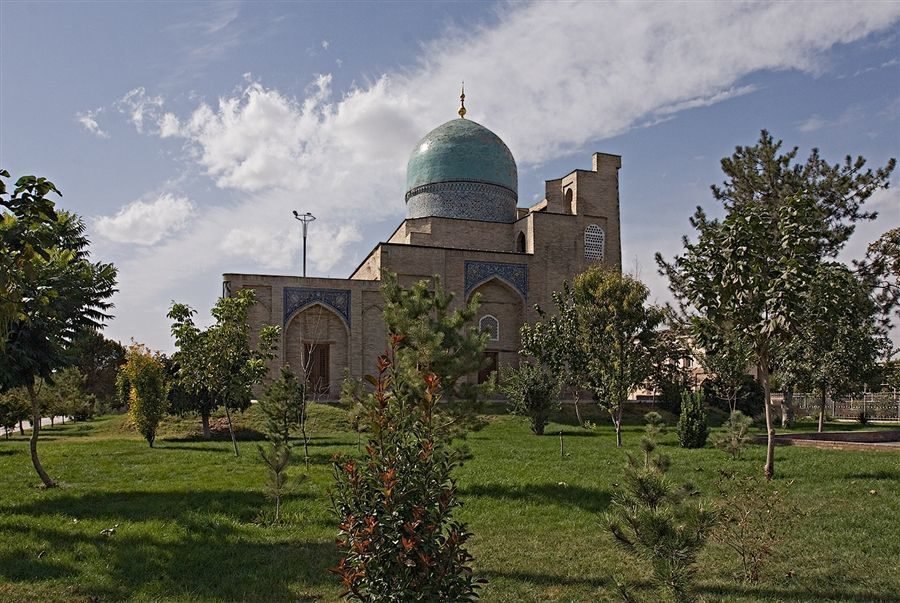 The mausoleum of Abu Bakr Kaffal al-Shashi - one of the most important monuments of culture and architecture of Tashkent - is part of the historical and architectural complex Hazret Imam, located in the old district of the city. Historically, the Architectural Ensemble Hazret Amam was created thanks to the mausoleum of Abu Bakr Kaffal al-Shashi, around which new buildings were built, which for several centuries formed a whole complex. More... 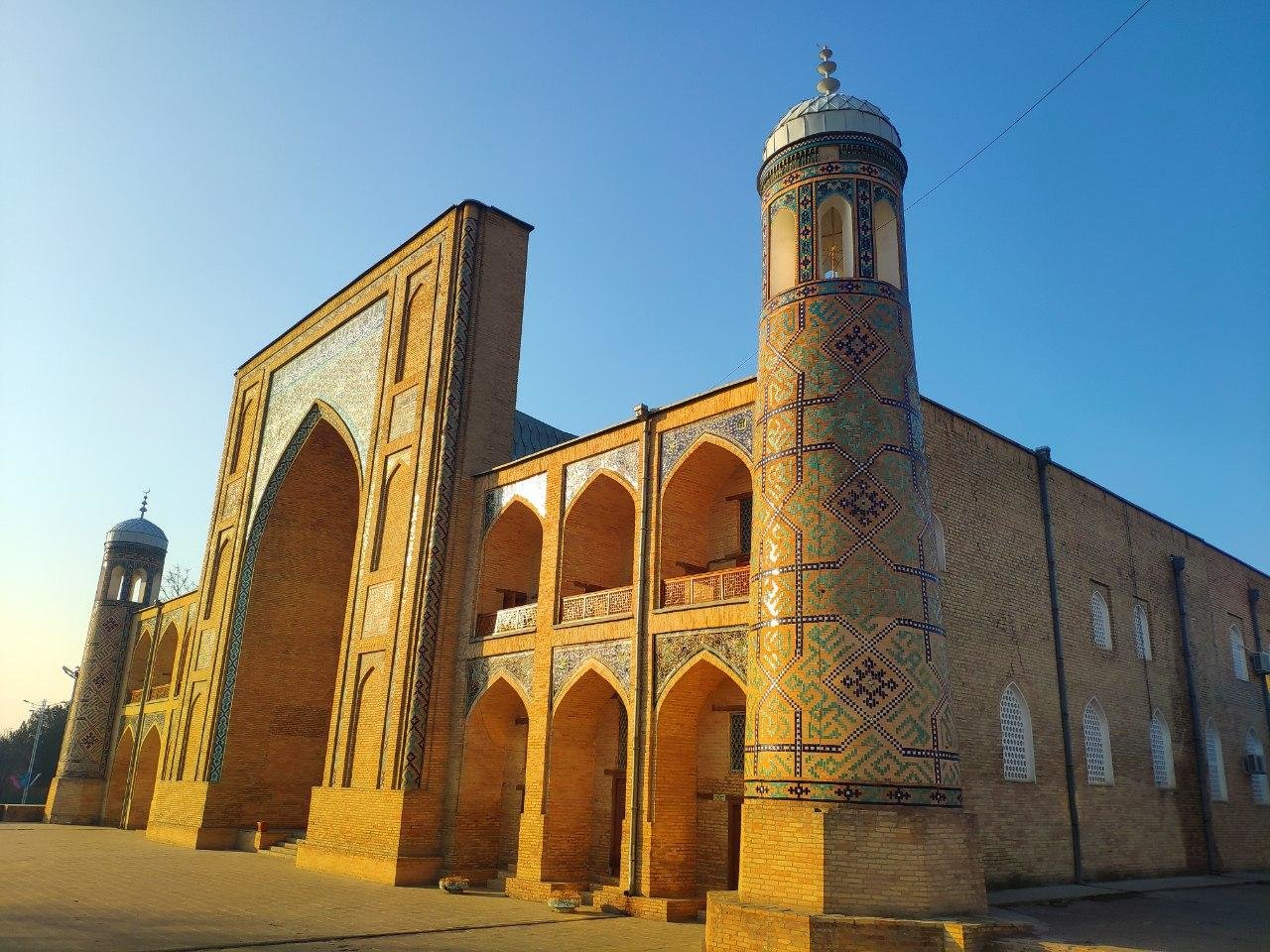 Kukeldash madrasa is the largest madrasa and one of the most famous historical monuments in Tashkent. It is not difficult to find it, it is located in the historical heart of the city - in the area of Chorsu square and the Tashkent Registan. In the IX and X centuries, it was here that the Czech fortress gate, one of the three city gates, was located. More... 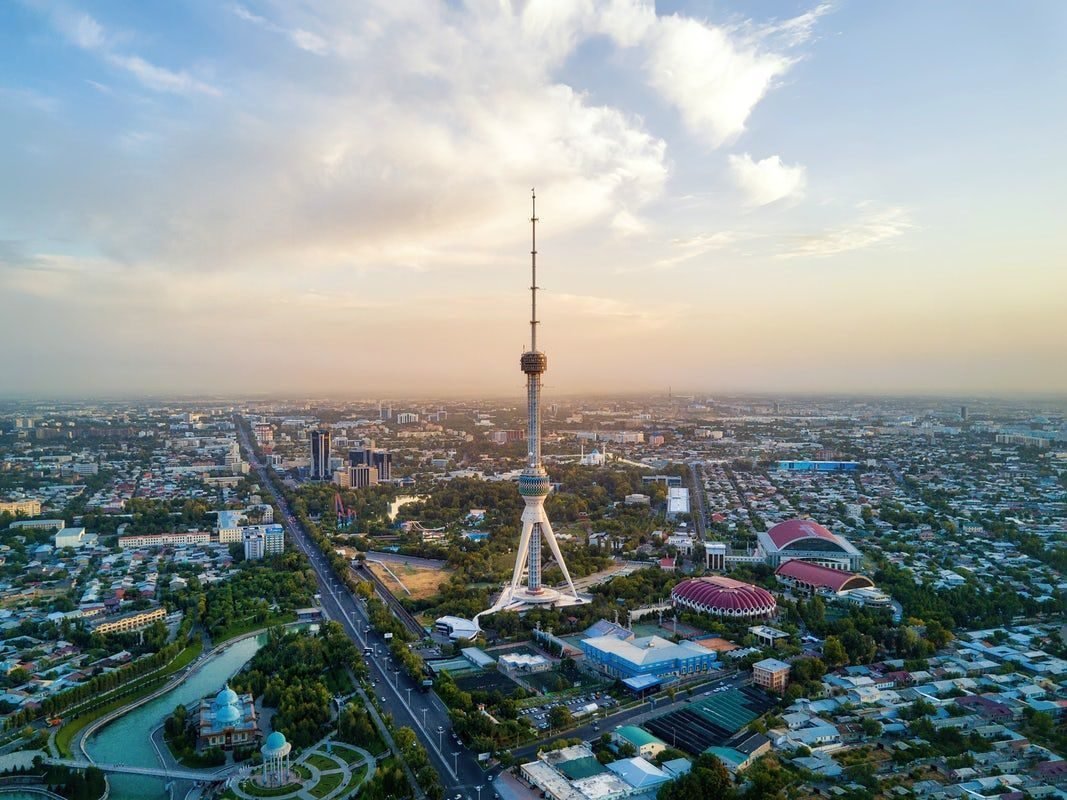 Visiting Tashkent, it is impossible not to see the Tashkent TV tower. It is visible from almost every point of the city, its height reaches 375 m. This structure is the tallest TV tower not only in the capital of Uzbekistan, but also among all cities of Central Asia. Today, the city and the TV tower have come to be perceived as a whole, so it is successfully combined with urban views. More... 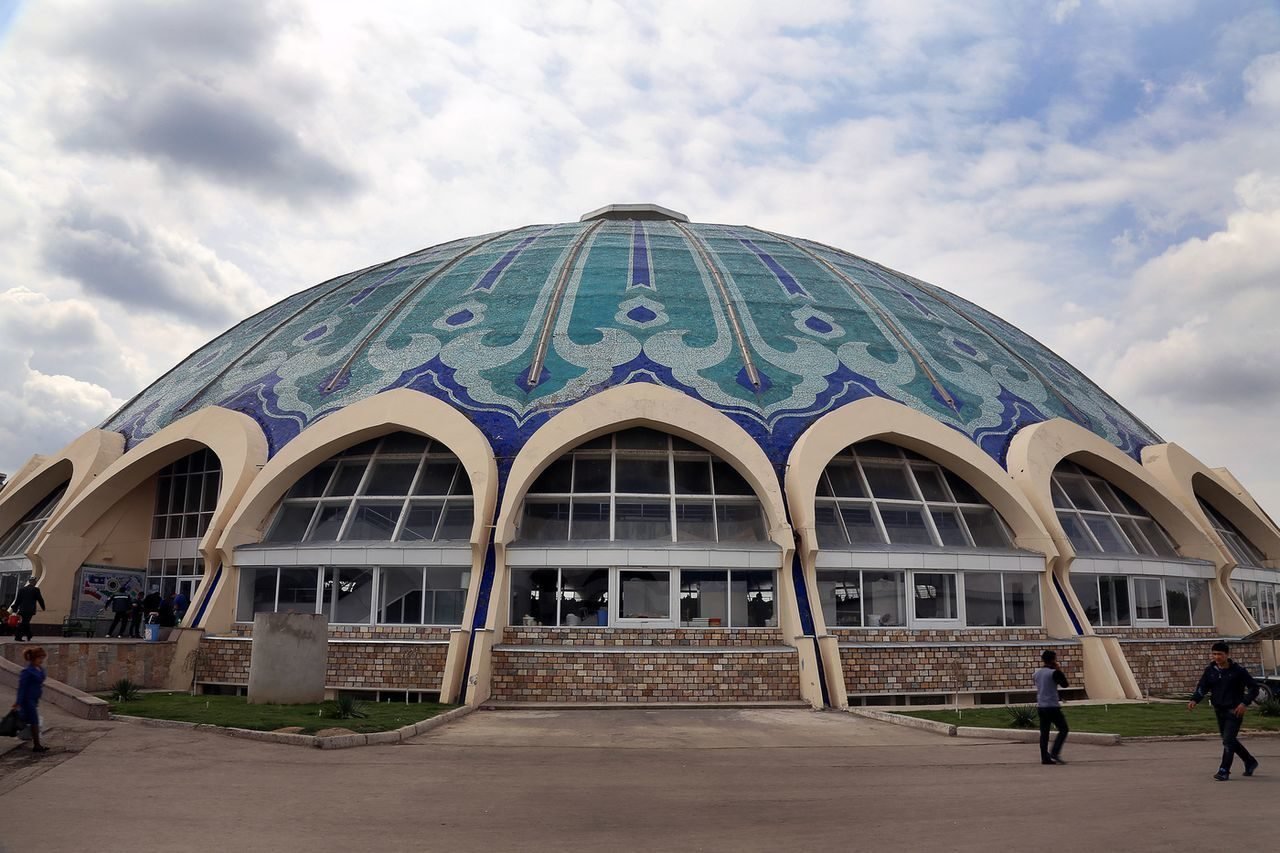 Chorsu Bazaar is one of the largest bazaars in Uzbekistan and Central Asia, located in the old part of Tashkent called "Eski Shahar", on Navoi street. Chorsu Bazaar was known in the middle ages and was of great importance on the road Of the Great Silk Road. In the Central part of the ceiling of the Bazaar, covered with ornaments, there is a monumental dome structure with a diameter of about 300-350 meters-a winter three-tier building of the Bazaar with an Elevator system. More... 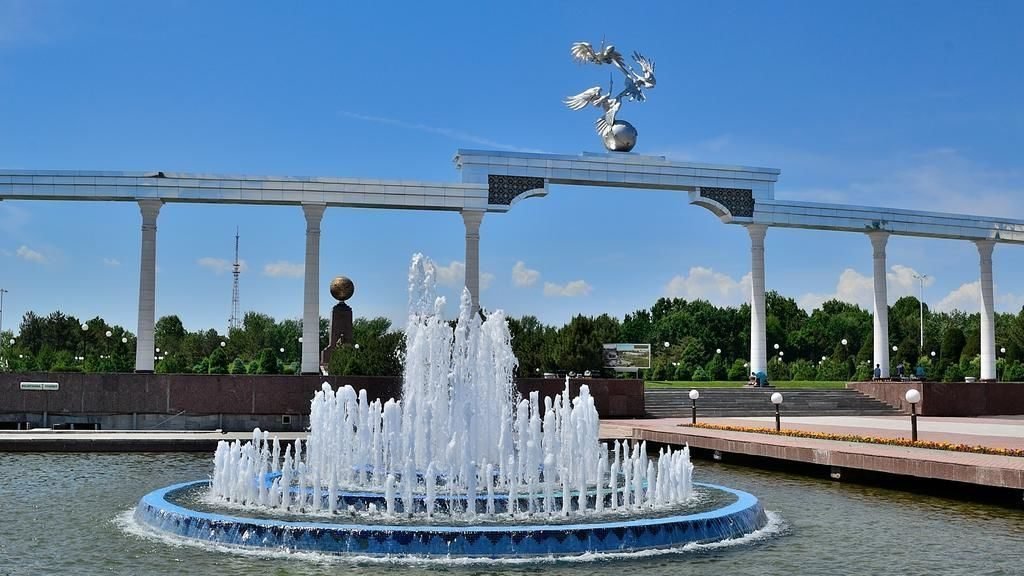 Independence square (Uzbek for "Mustakillik Maidoni") is the main square of Uzbekistan, which is located in the heart of Tashkent. Citizens often gather here to celebrate national holidays, on weekdays and weekends you can see the newlyweds, and in General, there are always a lot of people on the square and there is a pleasant atmosphere. The Park area is located close to Ankhor — the city's river channel. More... 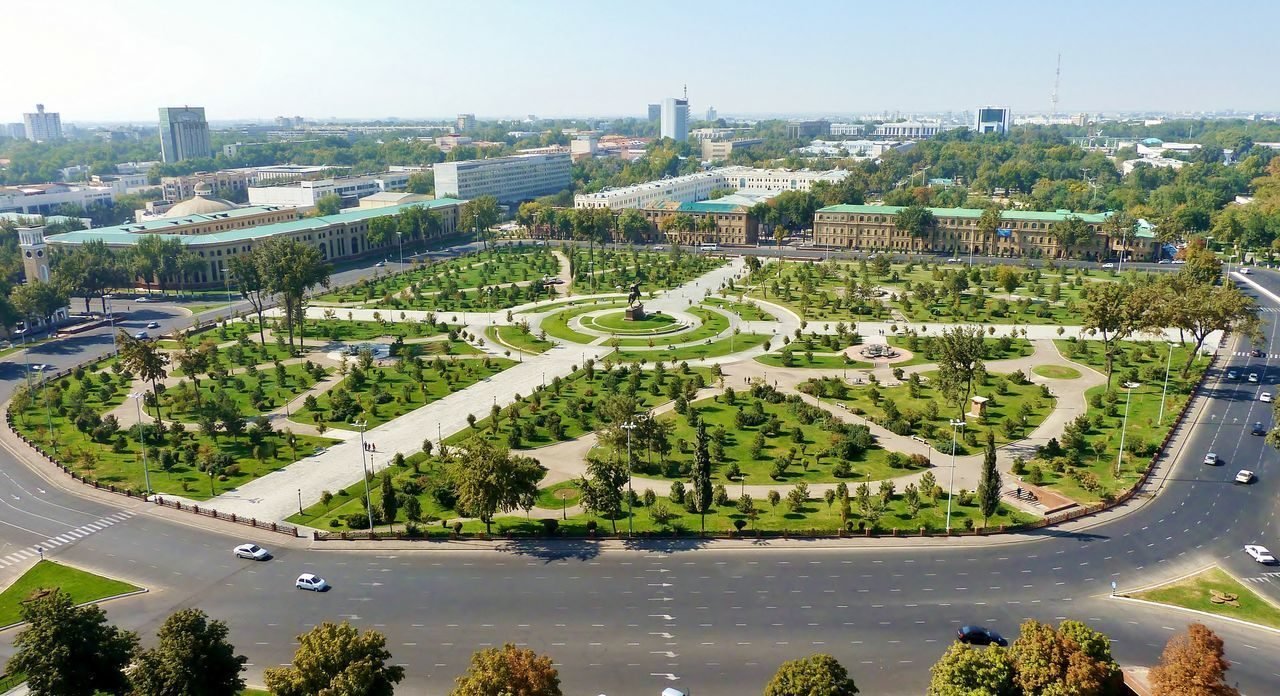 The square in the center of Tashkent, now called Amir Temur square, was laid in front of the headquarters of the Turkestan military district on the initiative of Mikhail Chernyaev and designed by the architect Nikolai Ulyanov in 1882 at the intersection of two Central streets of the new city — Moscow and Kaufman Avenue called Konstantinovsky square. More...

The memorial complex "Shahidlar Khotirasi"(translated from the Uzbek language - "Memory of victims of repression") occupies a vast territory opposite the Tashkent TV tower and is a Park recreation area on the Bank of the Bozsu channel. The total area of the memorial is 17 hectares. From afar, the memorial rotunda, 27 meters high, consisting of eight marble columns and topped with a rounded turquoise dome, attracts the attention of passers-by. More... 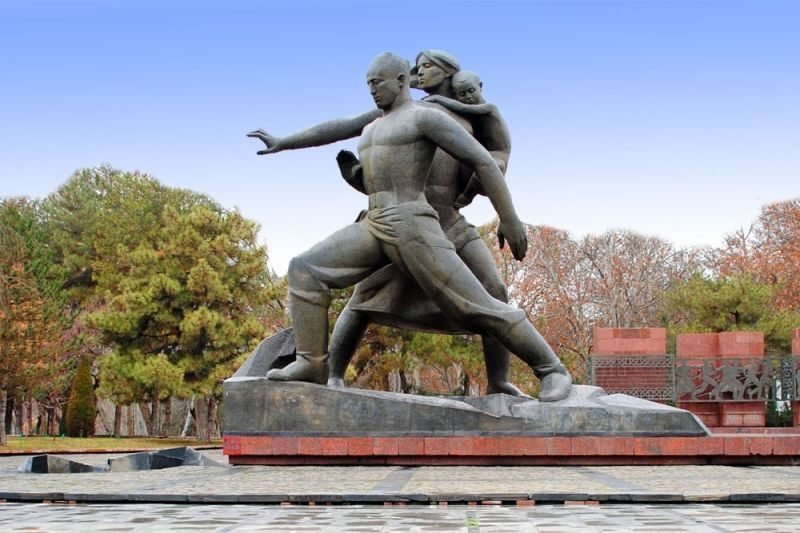 Among the many monuments decorating the streets and squares of Tashkent, the monumental complex “Courage” deserves special attention. It is dedicated to the events of almost half a century ago, which left a deep mark in the history of Tashkent. On a granite podium there is a cube of black labradorite, on one side of which a date is carved: April 26, 1966. More... 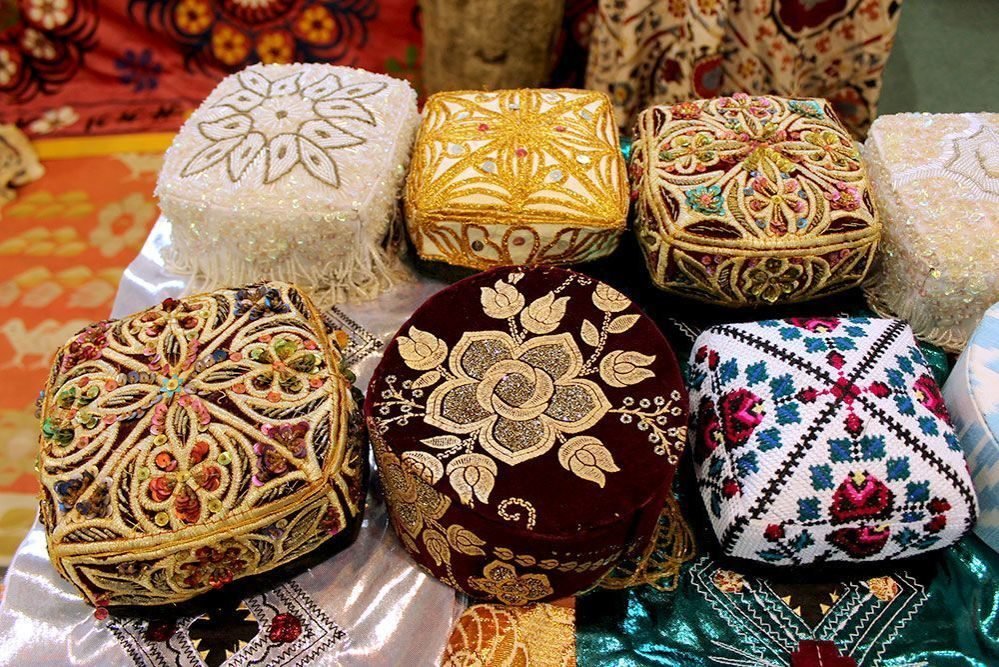 The Museum of applied art, which presents more than four thousand exhibits and items of decorative and applied art (ceramics, gold embroidery, carpets, paintings, silk and jewelry) of the best masters of Uzbekistan, was founded in 1937 on the basis of a temporary exhibition of folk crafts. The Museum is located in the Palace building, once owned by the Russian diplomat Alexander Polovtsev, known for his reverent attitude to architecture and art. More... 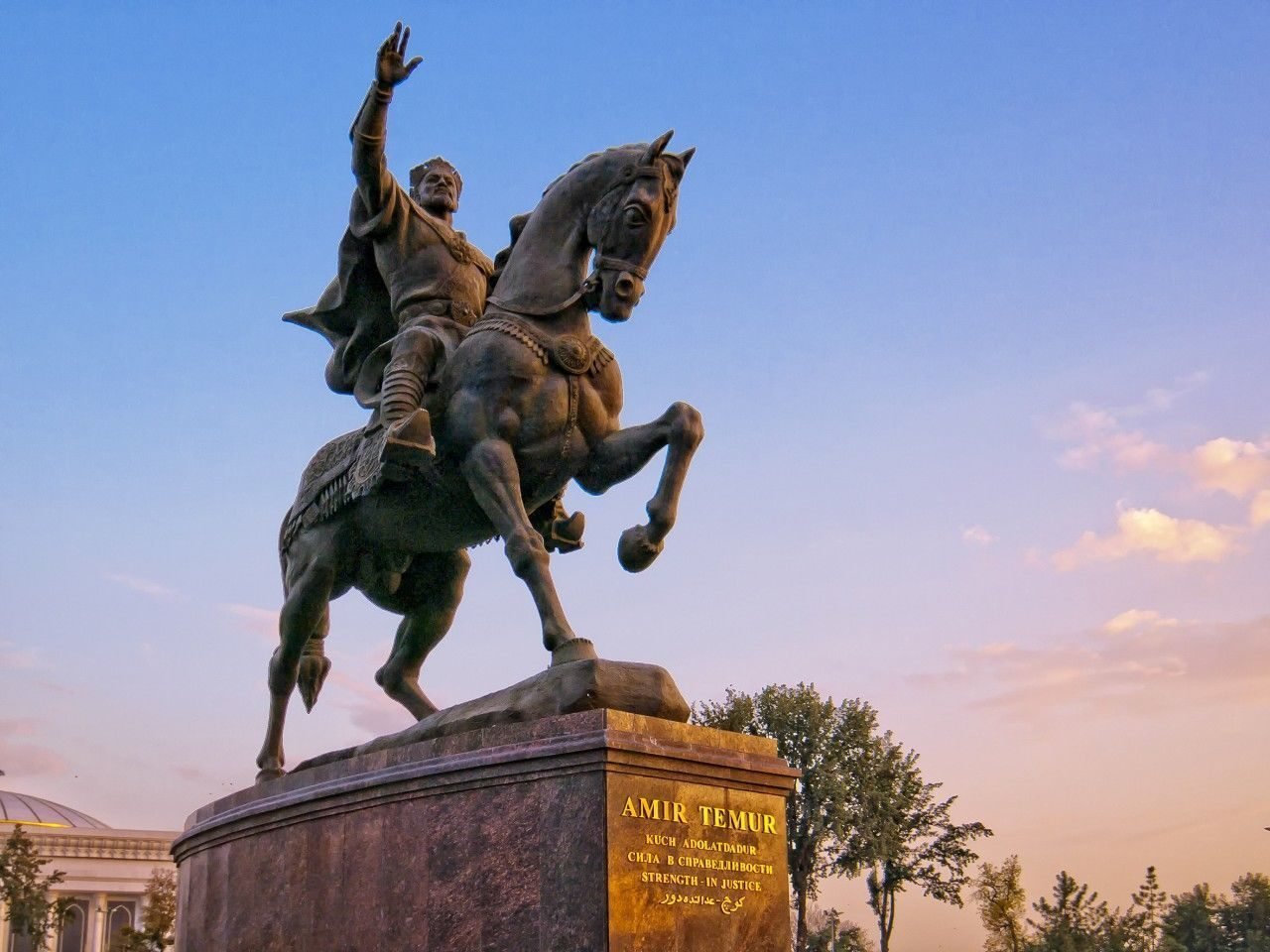 Since 1993, a monument to Amir Temur stands in the center of the square. The Bronze Equestrian Monument to Tamerlane, who was a great statesman and commander of the Middle Ages, one of the founders of Uzbek statehood, is designed to ideologically consolidate society around the great achievements of his ancestors. Approaching the monument, you will see our majestic ancestor, who sits belligerently on a horse, blessing his descendants, raised in the sky with his hand. The monument stands in the center of the square, on it the inscription - the words of Amir Temur himself: "The power in justice".