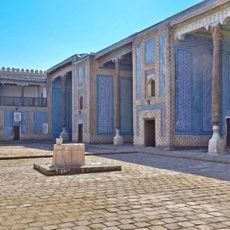 The Tash-Khovli Palace (1830-1838) is located in the Eastern part of Ichan-Kala in Khiva. It is a sample of the greatness and power of the construction of buildings of those times in the Khorezm style. Tash-Khovli Palace is a Palace complex in Khiva (Uzbekistan), the main Palace of Khiva khans.  It consists of three parts: Family courtyard - the khan himself lived here and housed his harem; Ishrat-Khauli (the eastern part of the palace) mehmonkhona - ceremonial rooms where receptions and ceremonies were held; Arz-Hauli (the western part of the palace) Arz Khona is located here - a place for litigation. Tash Hauli Palace is surrounded by high walls and built entirely of baked brick. The palace is an impregnable fortress, but the decor of all the rooms inside these walls is striking in its richness and grace. The scale of the Tash-Howley Palace is impressive in size. The Khiva ruler Allakulikhan wished that the palace was built in two years, and when the architects refused to meet such a short time, the khan ordered them executed. The construction of the palace took 8 years (1830-1838). Tash-Khauli Palace is a real masterpiece of Khiva architects. In total there are more than 160 rooms of various sizes and types in the palace. Almost all the rooms in the palace are luxuriously decorated. The part of the palace reserved for the khan’s chambers and the harem is separated from the official part by a continuous corridor. The most spacious and most richly decorated room is the chambers of the khan himself, the other four rooms were intended for the wives of the khan, who, according to the Koran, should not be more than four. The walls of the rooms inside the palace are decorated with blue and white majolica, the painted ceilings and the filigree carvings of wooden columns are preserved of our days in its original form.