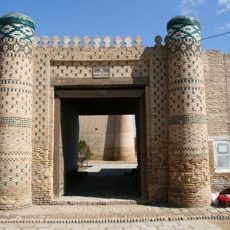 The summer residence of Nurullabai Khan of Khiva was built in the period from 1906 to 1912. The Palace is located in the outer city of Khiva, Dishan-Kale, and a ticket from Itchan-Kala is enough to visit it. The Palace impresses with its splendor and is very different from other palaces built by the khans in different periods, it looks more like the residence of a European monarch in the art Nouveau style. The palace was built by the wealthy merchant Nurullabai and donated to the Khiva khan, but on condition that the name of the palace is retained by Nurullabai. German craftsmen worked on the design of the door and window openings, and Russian stoves laid out the stoves, using tiles made especially for this palace at the Imperial Porcelain Factory in St. Petersburg. Nicholas II also presented the khan with crystal chandeliers, and in order to light the electric bulbs, he also presented them with a small sixteen horsepower engine. Even in the decoration used Venetian mirrors!