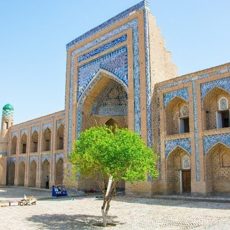 Muhammad Rahim-khan Madrasah is part of the complex of attractions of the ancient city of Itchan Kala in Khiva. One of the most famous and large-scale Khiva madrassas was built by Muhammad Rahim Khan near the Kunya-Ark citadel in the last quarter of the 19th century. The Khan became famous as an enlightened ruler who patronized the people of science and poets.

The building of the Muhammad Rahim Khan madrasa in Khiva is a two-story building, with a high entrance portal to its territory leading to a four-Bay courtyard. The entrance to the madrasa of Muhammad Rahim Khan from the street side is through a courtyard fenced with a solid wall and built up around the perimeter with cells-hujras one floor high. This place is the outer courtyard of the madrasa. There is also another courtyard-very cozy and surrounded by an arched row of hujras. Inside was a Central structure of two stories, with an impressive portal on the front side. At the corners of the building there are turrets — guldasta.

The domed finials are decorated with green mosaics. The facade is dominated by majolica of the traditional blue and white color. In the same way, the decoration of tympanums (fields on the pediment that look like a semicircle or triangle), as well as columns is made. Artful brickwork figuratively decorates the Ivan-ceiling above the main entrance and the vaulted tops of the loggias. In the courtyard, there were four aiwans (overlappings supported by rows of pillars).

This madrasah stands out among other similar educational institutions for its size. The complex of buildings includes a winter and summer mosque, a lecture hall (darshona), a store with books, a dining room, and hujras. As a patron of scientific works, a philosopher and poet, and a champion of literary art, Muhammad Rahim Khan arranged comfortable classrooms inside the building, and provided the library with the necessary valuable manuscripts.

Mohammad Rahim Khan madrasa has 76 single-storey rooms for students, designed to accommodate 152 people. A special feature of residential premises is a room attached to each cell, designed for various household needs.