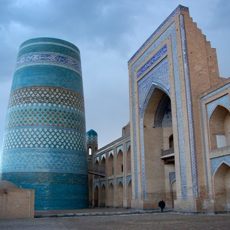 "This beautiful building will stand forever for the joy of posterity." The Arabic inscription decorating the 25-meter portal of Muhammad Amin Khan Madrasah is roughly translated into Russian. As time has shown, the phrase was prophetic. One and a half meter walls of burnt brick construction have survived to our days almost in its original form.

But they do not attract the attention of many tourists. The large dimensions of the former educational institution are to blame - the madrassah covers an area of ​​72 by 60 m². Thanks to such an impressive size, the building has earned the glory of the largest madrassah in all of Central Asia.

The two-story building consists of 130 two-room cells. According to historical documents, up to 260 students could be accommodated in the walls of Muhammad Amin Khan Madrasah. Once upon a time there was even the office of the Supreme Muslim Court. The hotel located in the building helps everyone to plunge into that atmosphere and travel back several centuries ago. Travelers say that the slightly refurbished cells of the students are used as hotel rooms.

The architectural style of the building is not much different from other madrassas of that time. The building is characterized by symmetry, a spacious courtyard, an elongated rectangular portal and numerous arched vaults with patterned grilles.

Above the four corners of the madrasah are characteristic guldast towers and five domes. The facade was decorated with glazed bricks; wooden doors are distinguished by ornamental carvings and cladding from burnt clay - majolica. Particularly attractive madrassas give arched loggias.

Numerous buildings are hidden behind the main facade of the attraction: utility rooms, classrooms, a winter mosque. The courtyard is designed in the form of four small portals. Their front part is also decorated with majolica. As a harmonious complement to it are patterns and Arabic inscriptions. The total area of ​​the courtyard is 38 by 38 m².

The architectural unity is also supported by the interior of the madrasah, designed in the spirit of national Uzbek traditions.