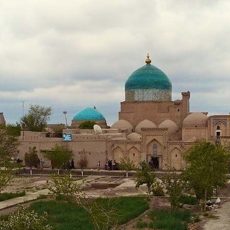 The inner city of Khiva is rich in architectural masterpieces. Against their background, the turquoise dome of the Pahlavan Mahmud mausoleum rises. This tomb is only part of a large memorial complex. The architectural ensemble also includes a mosque, a small madrasa, a Sufi monastery (khanaka), dormitories for the blind and the tomb of Isfandiyar Khan. In Central Asia, people with incredible power were called “Pahlavan” (hero). Pakhlavan Mahmud - lived in the fourteenth century, was a poet revered in Khorezm, a furrier by profession (a master in the manufacture of furs from hides, in the manufacture of fur products), a distinguished wrestler-hero. According to legend, after his death in 1322-1325, he was buried in the courtyard of his workshop. Khiva residents considered him the patron of the city, and after his death, the Muslim clergy elevated him to the rank of saints. And in 1701, a mausoleum was erected at the place of his burial. There are many legends about the courage and strength of Pakhlavan Mahmud. One of them says that by his strength Pahlavan conquered the Indian ruler and he agreed to reward him with everything that the hero wanted. Then Pahlavan Mahmud said: "Free my people from captivity." To which the Indian ruler asked the question "how many people should be free?" Pahlavan Mahmud said: "How many people fit in cowhide." Taking a large piece of leather, he cut it into thin strips, which he then tied into one large belt and wrapped all the prisoners. So Pahlavan Mahmud saved many people from slavery.