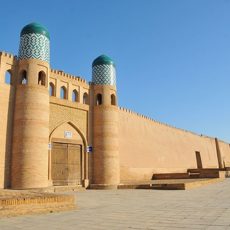 The Kunya-Ark Citadel is considered the oldest surviving residence of the Khiva khans. It was built at the end of the 17th century. According to scientists, the Kunya-Ark citadel was erected on the ruins of former structures. The fact is that during archaeological excavations coins and fragments of ceramics dating back to an earlier period were found.  Kunya-Ark is a kind of "fortress within a fortress": it is located inside Itchan-Kala, the historical center of Khiva. On the territory of Kunya-Ark there were Khan's Palace, winter and summer mosques, powder factory, mint, court, workshops, warehouses, harem and other buildings. Now both mosques, the reception hall, the mint, the harem building and the guardhouse at the Eastern gate are preserved from the old building of the citadel. And in front of the entrance to the fortress there is a huge square. Military parades and ceremonial reviews were held here. Even public executions of criminals and apostates.