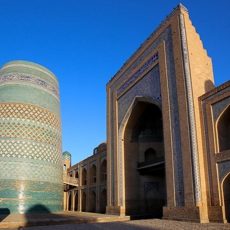 Kalta-minor Minaret was conceived by the Khan of the Khiva khanate, Muhammad Amin Khan, as the largest and tallest in the Muslim world. According to his plan, the height of the minaret was supposed to be 70-80 meters, with the diameter sharply decreasing with the height, which would make the minaret more durable. The diameter of its base is 14.2 meters.  Construction began in 1852, and in 1855, when the height of the minaret reached 29 meters, construction was suddenly stopped. According to the Khiva historian and writer agahi, the construction was not completed due to the death in 1855 of the initiator of the construction — Muhammad Amin Khan, who died during the battle near Serakhs. In 1996-1997, as part of a large-scale campaign to reconstruct the historical architectural monuments of Uzbekistan, and on the occasion of the 2,500 th anniversary of the city of Khiva, the minaret was completely restored. During the restoration, in particular, unique patterns and inscriptions were restored.

Kalta Minor is known for its incompleteness, as well as its unique decor. This is the only minaret completely covered with glazed tiles and majolica. The tiles are dominated by dark green, blue and white colors, and some patterns have a turquoise color. On the outer walls of the minaret there are inscriptions in Nasta'liq script in, which is now used only for the Persian language.