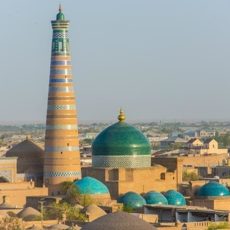 One of the most notable buildings of the ancient part of Khiva is the minaret and madrasah, which are part of the complex of buildings of Islam-Khoja. The complex resembles the architecture of the XI–XIV century, although it was built a little more than a century ago, at the end of the first decade of the XX century. According to the clever idea of the architect, the attractiveness of the buildings creates an unprecedented contrast: the most elevated minaret of the city is located next to a miniature madrasah. Thus, the minaret, thanks to the visual effect of matching, seems simply gigantic. It served as a guide for travelers approaching the city, initially the role of a kind of lighthouse was foreseen for this architectural landmark. The medieval standard of architecture can be traced in the structure of the minaret. The lower part is wide, the top of the tower is noticeably narrower. The complex bears the name of Islam Khoja, the main Khiva vizier, with donations and the care of which all the buildings were erected. The vizier was close to Muhammad Rahim Khan II, who ruled just before the completion of construction. As a progressive politician, a high-ranking dignitary strengthened relations with powerful Russia as much as he could, and he repeatedly visited the capital of the Empire. Under the patronage of Islam-Khoja, the first school with a secular education, a post office, a telegraph opened in his hometown. He also took care of the health of his subjects, having built a pharmacy and a hospital, and the quality of Uzbek cotton - a ginnery was established here when he was high dignitary. Envious people intrigued much against Islam-Khoji, persuading the khan to expose the vizier to disgrace and claiming that his activities undermined the authority of the ruler. Everything ended with an assassination attempt, on the way to the suburban possessions, Islam Khoja was met by the conspirators, the wounds inflicted were fatal. The memory of this outstanding man is immortalized in the name of a magnificent complex of buildings erected by his order. The final decoration of the minaret was performed by skilled artists Ishmuhamed Khudaiberdiev, Khudaibergen Khoja, as well as Bolt Vaizovu. The son of Rakhim Khan, who followed him on the reign of Isfandiyar Khan, set the best task for the best masters of Khiva: to surpass the other pearl of the East in magnificence - the Bukhara minaret Kalyan. The structure is 56.6 meters high, having a diameter of about 9.5 meters at the base, and in fact turned out to be higher than its competitor, while not losing sight and harmony of eyewitnesses. The majolica of sky-blue, pale turquoise, snow-white, deep blue colors forms patterns horizontally encircling the tower, not inferior in brightness to the sunny sky of Khiva. Decorations give the nobility to the brickwork, visually additionally increase the height of the structure. You can explore the city from a site located at a height of forty-five meters. The highest point of Khiva offers a view of all its sights, the total number of which exceeds 60. The top of the minaret is equipped with a cornice and a dome under the Central Asian traditions, under which there are ganch grates. From here the herald-muezzin calls for prayer. Madrasahs are much smaller, asymmetrical in plan, the main entrance to it is located directly near the minaret. The interiors are represented by a rather spacious hall under the central dome, forty-two hujras (cells) along the perimeter of the patio. A mosque adjoins the central building from the southeast. The dome of the structure is low, massive, mihrab (a niche indicating a direction to Mecca) and the entire interior is decorated with majolica, ornate patterned ganch. The outer part of the madrasah at the entrance is decorated in the same style with the neighboring majestic minaret. The gate superstructure forms the second floor. The architectural complex of Islam-Khoji is the most beautiful pearl of Uzbekistan in the very center of Khiva, all its buildings are in amazing harmony with the surrounding landscape, perfectly combined with the oldest buildings of the city.