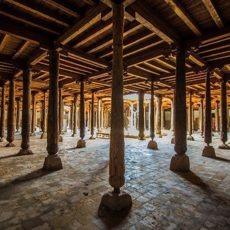 Djuma Mosque - which means “Friday Mosque” (in honor of the day of special prayer) - the most significant prayer building of ancient Khiva, occupying an honorable position in the center of Ichan-Kala. Unlike traditional architecture, the building is deprived of domed ceilings, arches and visually highlighted portals at the entrance. This is a one-story building with a powerful wall, in which three entrance apertures are made.

This is explained by the fact that Abdurakhman Mikhtar, an approximate dignitary of the Khiva ruler, was building new structures on the site of the previously existing in the X century. By order of the dignitary, as a sign of respect for the traditions of previous generations, the ancient architecture was exactly reproduced.

The only street of ancient Khiva, laid straight, without turns, connects Kunya-Ark fortress with the main entrance to the Djuma complex. On a wooden door - skillfully executed fine carvings. The well-preserved door is decorated by Khiva masters over seven centuries ago.

The chapel room tells about the art of woodcarvers in different historical eras. The prayer room is surrounded by columns with a total number of more than two hundred, the height of which is different, in the range from 4 to 5 meters. Columns serve as a support for the roof. By themselves, they represent a work of art, about twenty ornaments of the 11th – 14th centuries, there are more ancient ones belonging to the 10th century. Later works dating back to the 16th century, imitated by ancient masters, are mottled with a peculiarly flattened relief pattern.

The surprisingly harmoniously combined columns are actually of different origins. Some were transferred from the ancient buildings of Khiva, some belonged to the cult building located here earlier, there are those that became military trophies in the campaigns of the Khiva khan. They are united by the high art of carving and the bases made in a single style, depicting elegant jugs filled with flowering plants.

On the south side there are lancet arches having a single axis of symmetry, as if enclosed by a smaller one in a larger one. The holes in the roof, according to the number of entrances, pass a sufficient amount of light, which does not completely disperse the twilight, but creates a unique mystical game of shadows and partial shade.

Friday chapel and the central minaret of Ichan-Kala - a kind of starting point for exploring Khiva antiquities, it makes sense to start exploring local attractions from here.