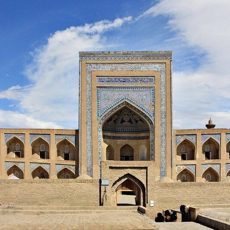 The Allakuli Khan Madrasah, along with the adjacent caravanserai of Alla Kuli Khan, is part of the complex of historical and architectural monuments of Itchan-Kala in the city of Khiva in Uzbekistan, which is a Museum of buildings of the XIV century under the open sky.

The architecture of Allakuli Khan Madrasah is considered one of the most magnificent and beautiful buildings of the time in the city. The courtyard of the Allakuli Khan Madrasah in Khiva is slightly different from the traditional courtyards of educational institutions of that time. The rows of hujras with two floors rest on the edges of the  domes and rise above the domes of the entrance gates of Palvan Darvaz. The building of the madrasah itself does not have the shape of a rectangle, but a trapezoid with a four-tiered two-story courtyard.

The complex of Allakuli Khan madrasah includes 99 hujras (or cells), 2 mosques (winter and summer in western aivan), an audience for lectures (darskhan), an entrance hall. Each hujra is equipped with a door and a window, its lower part is decorated with burnt bricks in the shape of a square, and the walls are plastered with ganch. The inner arches of the hujras are not decorated with anything.

The architecture of the late Khorezmian Middle Ages appears here in all its splendor. Significant proportions do not harm the amazing proportionality, and the traditional decor gives the building both severity and heavenly lightness. Arched niches and a portal above the entrance, tympans and double arcade frames, as well as three quarters of the columns of the portal are also decorated with majolica and images in black contours, as well as beautiful floral patterns. The southern portal of the building attracts attention with an ornament in the form of many intertwining rings.