One of the main historical monuments of Samarkand is the Gur-Emir tomb, which contains the remains of the great ruler and conqueror Tamerlane, as well as many members of his family. The name of this mausoleum can be translated as" ruler's tomb " or "Emir's tomb". The construction of this memorial structure began in 1403 by order of Timur himself.

The reason for the construction of this building was the ruins of an ensemble of buildings that were built by Mohammed Sultan, one of the Emir's grandsons. This complex contained a madrasah, a mosque, many minarets, and a khanaka. The young Prince built all these buildings for himself and even lived there for a while. But Timur, for unknown reasons, ordered to completely dismantle this complex, and in its place to begin construction of a new mausoleum. From the buildings of Muhammad Sultan, only the Prince's crypt, minor fragments of marble walls with gold coating and blue domes of minarets have survived to this day. But the Royal tomb of Gur-Emir itself is still standing, almost preserving its original appearance. Every year, this place is visited by thousands of tourists and pilgrims to pay their respects to the fearless conqueror Timur.

The appearance of the Gur-Emir is simply overwhelming with its splendor and grandeur. Some researchers claim that this tomb became the prototype and basis for such famous historical monuments as Humayun and the Taj Mahal. Naturally, Over the many centuries of the Gur-Emir memorial's existence, it has become overgrown with numerous legends and terrible stories that are passed down from generation to generation.

Tamerlan was the first to be buried here. This great warrior spent most of his life in campaign  and battles. No wonder he died on the March, but not from a sword or arrow. The fearless leader was struck down by ordinary pneumonia when he was returning home from another successful battle. The body of the conqueror was taken to Samarkand and buried with all honors in the tomb of Gur-Emir. For a long time, his sarcophagus was the only one in the tomb, but during the reign of Ulugbek, other members of the Timurid family were also buried there.

The construction of the Royal tomb is an excellent architectural example, which was characteristic of the style of Central Asia of the XV century. The interior of the tomb impresses visitors with its full splendor. The best artists and craftsmen from all over the East worked here, and Tamerlan brought them to Samarkand in large numbers all his life.

Immediately striking is the huge bright blue dome of the tomb, which has the shape of an onion. On the outside, it has exactly 64 borders, richly decorated with white inclusions. This number of facets corresponds to the years of the life of the Islamic prophet Mohammed. It is noteworthy that an identical dome can be seen on the mosque in St. Petersburg on Kronverksky Prospekt. The construction of this building was supervised in 1913 by the Emir of Bukhara. Together with the architect Alexander von Gauguin and the artist Nikolai Vasiliev, they decided to recreate an exact copy of the dome from The Gur-Emir mosque.

The interior of the tomb is not inferior to external luxury: there are plenty of marble panels, terracotta bricks and ornaments of blue and white slabs. Tamerlane chose the outstanding master of the time, Muhammad Ibn Mahmud Isfahani, to finish the interior of the dome and the drum. It is worth noting that Timur was not mistaken in his choice, as the result was simply stunning. He has designed the mausoleum of blue and Golden hues, which can dazzle with their beauty almost in the literal sense.

Also, the eye is drawn to the old wooden doors with elaborate carvings and a huge jade slab directly above the burial site of Timur, which was installed by his grandson Ulugbek. The heir brought this slab from mogolistan itself to place it near the remains of his ancestor. According to one legend, this piece of jade served as a throne for Kabeh Khan, who was a direct descendant of Genghis Khan. Ulugbek promised his grandfather to write an ominous inscription on his tombstone. These words can be read now when visiting this mausoleum. It says, " anyone who disturbs my peace will suffer and die." For a long time, many people looked for a hidden meaning or hidden threat in these words. About the tombstone and the inscription on it tell a huge variety of different legends that have stirred the consciousness of all mankind for many centuries.

One legend says that huge misfortunes can come from the slab. A case is described when a Persian conqueror captured Samarkand, and then decided to take the great Tamerlane's slab with him as a trophy. On his arrival home, the Shah installed this slab as a stepping stone to his throne, so that everyone could see Tamerlan at his feet. But the stove did not bring him much happiness. On the contrary, after this misfortune, the Shah of Persia was persecuted at every turn. Livestock pestilence, epidemics, droughts, and crop failures began. After that, members of his family began to die, and the Shah remembered the warning sign on the slab. As quickly as possible, he removed the headstone and returned it back to the tomb. 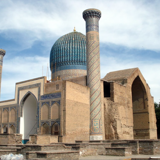 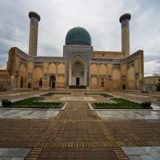