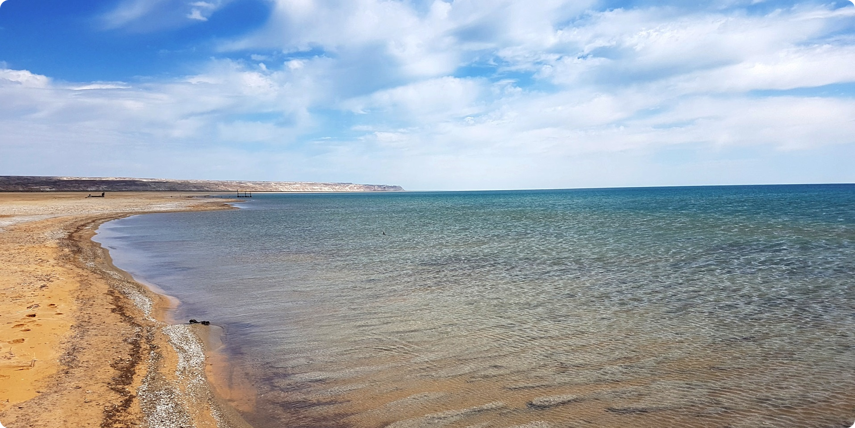 Nukus
The capital of Karakalpakstan - the city of Nukus-is located on the Amu Darya river. But the nearby Sands of Karakum, Kyzylkum and Ustyurt plateau, plus the irrational use of irrigated acreage by canals and pesticides, have led to a difficult environmental situation in the region. The once-fertile Delta of the Amu Darya turns into salt marshes. 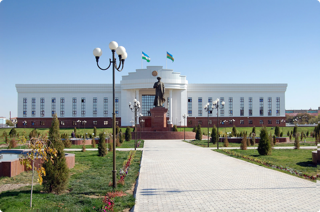 Nukus is also affected by a very hot climate with low precipitation and frequent sandstorms. The so-called Aral disaster begins in the region of Nukus. Even in ancient times, there was a settlement of shurcha on the territory of the city, which was part of the Khorezm state and was probably a defensive fortress. Herodotus described these places as inhabited in the 4th century BC. Little is known about the medieval period in the history of Nukus. The modern history of Nukus begins in the 1860s, when the village of Nukus appeared on the right Bank of the Amu Darya near the ancient settlement. It owes its name to the Karakalpak family of Nukis, part of which settled in this area. Soon the Russian administration made the village a military place, strengthening it and adjusting the infrastructure a little. When the Karakalpak ASSR was formed, Turtkul initially became the capital of the Republic. Due to frequent floods in Turtkul, the capital was moved to Nukus (1930).
Sometimes Nukus is called the Northern capital of Uzbekistan. 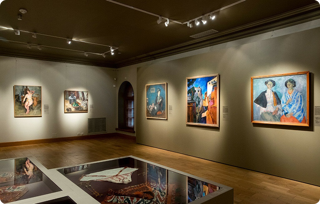 Several important enterprises and research institutions operate here. There are 4 universities in the city, and a developed network of sports grounds. What to see in Nukus. When visiting Nukus, first of all you need to visit the Savitsky Museum of art, which is quite famous outside of Uzbekistan. It contains a rich collection of Russian avant-garde artists. Foreign politicians and statesmen (albert Gore, Jacques Chirac) spoke flatteringly about it. In addition, there is a local history Museum and the Museum of the Karakalpak folk poet Berdakh. Decorate the streets of Nukus the monuments Ulugbek, Ajiniyaz, Berdakh to. Archaeological sites are located in the vicinity of the city. This is the necropolis of Mizdahkan and Chilpyk religious building erected in the 2nd century by the Zoroastrians.

Muynak-ship Graveyard in the middle of the desert

Muynak is a name from the Turkic "Moynak", widely represented in the geographical terminology of a number of Turkic languages. Muynak is located in the Amu Darya Delta, from the Kazakh "isthmus", "narrow strip of water", "narrowing of the riverbed"; "strip of land, sand", "shoal".
Almost 1300 kilometers from the capital of Uzbekistan, on the territory of the Autonomous Republic of Karakalpak, is the once-forgotten port city of Muynak, located on the right southern Bank of the Aral sea. From the early 1960s to the 1980s, a port operated on the territory of the city. Previously, Muynak was a rich port 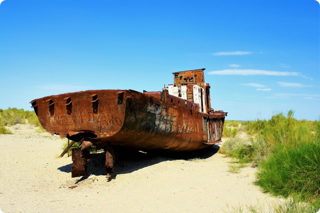 island in the Amu Darya Delta — the main sea gate of Uzbekistan, more than 20 different types of fish were caught in the sea, ships came in with a cargo of fuel, fish that was delivered to the city's fish cannery, which is the main city and food, and left with bales of cotton. Despite the fact that the surrounding dry desert, the symbol of the city to this day is the " sea " fish. In the second half of the XX century, the Aral sea began to disappear. in the late 1970s, after the sea borders retreated from Muynak by 30 kilometers, local residents under the leadership of municipal authorities began to break through channels to the sea, hoping to delay the inevitable outflow of water. It soon became apparent that the extent of the sea level drop exceeded even the wildest forecasts. Digging has stopped and today the once huge lake and the former port town are separated by about 100 kilometers.

What to see?
Now the city attracts tourists who are fond of extreme travel. Today, this city has the status of a Museum city, the Cemetery of ships, located not so far from the city, can please photographers and immerse people not for long in the post-apocalyptic world that is shown in many films. The ship Graveyard also hosts the annual "Element" abstract electronic music Festival. Famous DJs perform at the event. the festival's mission is to raise awareness of the world community about the problem of the Aral sea region and contribute to the revival of the Aral sea area.

The climate in Muynak
The climate in Muynak has a low humidity and, accordingly, is not particularly rainy. In winter, it can be very windy and cold because of the climate changes that have occurred in recent years, the city was actually in the desert. Summer is hot and dry, but sometimes in the evening the typical coolness of the region descends and sometimes even makes you wear a jacket.

The Ustyurt Plateau
The Ustyurt plateau is located in the Western part of Central Asia, between Mangyshlak and the Kara-Bogaz-Gol Bay in the West, the Aral sea and the Amu Darya Delta in the East. The territory of 200,000 km2 is divided between Kazakhstan, Turkmenistan and Uzbekistan. In translation from the Turkic language, the name "Ustyurt" means "plateau". 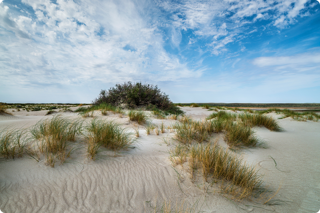 It is said that this land has spent many millennia under many meters of water. More than 20 million years ago, the Tethys ocean began to dry up. With the departure of the big water, huge areas of land were exposed. And the rocks of Ustyurt saw the light for the first time. But the memory of the sea past remained. Until now, in the valleys and on the tops of Ustyurt, you can see water-carved grottos, various shells, Ammonites and shells of marine life. Blown by constant winds and tempered by heat (in summer the temperature can reach +50 degrees Celsius), they have been waiting for their seekers for centuries.
The slopes of the Ustyurt plateau rise above the valleys to a height of up to 300 meters. They consist, for the most part, of sedimentary rocks and Cretaceous deposits, so they are easy to process. 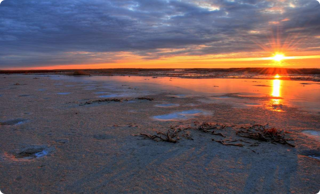 Wind and water have honed their skills here for centuries, and today the spurs of Ustyurt are an excellent creation of natural architecture. Someone compares these landscapes with underwater, someone-with alien. One thing is for sure: the sight of such fantastic scales and shapes takes everyone's breath away. Russian traveler and scientist mark Pestov who has been studying Ustyurt for many years shares his impressions: "There really is something to admire, there are cosmic landscapes. The so-called "chinks" of Ustyurt, cliffs, canyons, remnants, they are simply magnificent. Plus the desolation, unusual for a European – there you can spend days or weeks without meeting anyone at all. All this, of course, is impressive."

What to see?
One of the most popular places of Ustyurt valley Basira with the most incredible stone shapes. When the edges of the plateau collapse, they leave behind bizarre rock formations. They are called: Stantsiya mountains, or inselbergs. Some of them look like the fangs of a wild animal, others like a mysterious Ghost ship. Every tourist's imagination suggests its own forms and images. 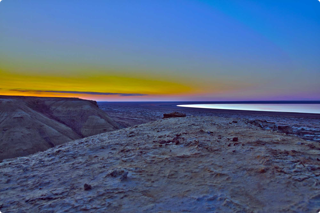 Popular among travelers as well enjoys dimple Karynzharyk. This is the second deepest depression of Mangystau – 75 meters below sea level. At the edges, like lace, it is framed by steep precipices. The Central part is occupied by snow-white litter, or salt marsh. The center of this Kingdom of salt is torn apart by three giant mountains. According to legend, these are three brothers-heroes who swore not to let the enemy enter their lands even at the cost of their lives. So they remained stone barriers in the way of the enemy troops.
Few people know that Ustyurt is home to the deepest caves in Kazakhstan. We found out this recently, just a few decades ago. As, in fact, and much that is connected with the mysterious plateau. The spaces between the roads laid here can take up hundreds of kilometers. What is hidden in these territories, sometimes even the locals do not know. Therefore, it is not surprising that the magnificent karst caves have not been visited by a human foot for centuries. Karagan-bosaga cave, a beautiful cave with beautiful vaults of limestone and quartz. When the light hits its walls, they seem to sparkle. This is an easy passable cave, without steep cliffs, about 150 meters in length. Known cave Balic outside the territory of the reserve. But there the descent is very steep, abruptly goes to a depth of over a hundred meters, without special equipment in this cave is better not to go. By the way, at the bottom of it is a small lake, about 20 meters. The Ustyurt is also the region of the rock mosques. Since the middle ages, the isolated caves of Ustyurt have been favored by Sufi hermits, adherents and missionaries of Sufism – one of the directions of Islam. In the soft limestone rocks, they cut down single cells and entire galleries, where they not only lived, but also opened religious schools – madrassas. For many in the spiritual hierarchy of the sacred places of Islam, Ustyurt stands immediately after Mecca and Medina. 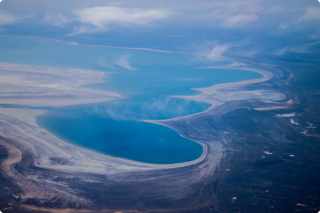 Shopan-ATA mosque is one of the most ancient and revered on the territory of Mangystau. It is believed that the Saint lived in the XII-XIII centuries and specially came from Turkestan to this region to preach. The Central room of the Shopan-ATA mosque is a large rectangular hall. Niches for prayers are carved on the sides, and the walls are covered with Arabic script. In the center of the room – two wooden poles. They seem to point the way to the prayers of the pilgrims. The light well in such mosques is not only a source of light. First of all, it is a direct path to the Supreme. Polished by thousands of touches, the tree is considered a sacred and obligatory attribute of all sacred places.
The most revered rock mosque in Ustyurt is the Beket – ATA mosque. It is believed that he of all Sufis reached the highest stage of enlightenment. Therefore, local Muslims place it in the third place among the pillars of Islam after the prophet Muhammad and Ahmed Yasawi. Beket-ATA died at the age of 63, at the age of the 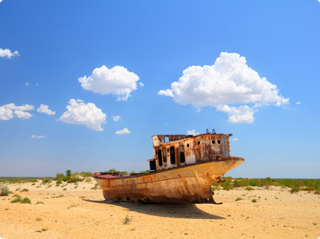 Prophet. In his mosques, which were 4 in total, he taught his followers. Here he treated people, and people from different countries came to him for healing. The Beket-ATA mosque is located in a rock in the depth of one of the mountain gorges. They say that the staircase that leads to it has about a thousand steps. Pass them – the whole test. This harsh road seems to remind you that the path to spiritual enlightenment is a hard work, a real test and overcoming yourself.
Ustyurt is still a territory of riddles. For tourists, 2-3 routes are open along the most striking and accessible for transport objects of the plateau. The rest is Terra Incognito for discoverers and researchers. It's hard to get here. But the one who does it gets impressions that will never be forgotten.

Climate
Ustyurt plateau is located in a zone of sharply continental climate, which means that the climate here is quite severe throughout the year. Summers are usually very dry and hot, and in winter there are storms and strong winds. As for the air temperature, in the summer months the temperature rises to +40°C, while in the winter months it falls to -10°C.