It is not known for certain when the city was founded on the site of modern Uzbek Khiva. It is assumed that it appeared more than 2.5 thousand years ago, although the first mention of it in written sources belong to the X century. Travelers of that time pointed out that Khiva was located on the caravan route from Gurganch to Merv (the modern names of these cities are Kunya Urgench and Mary). 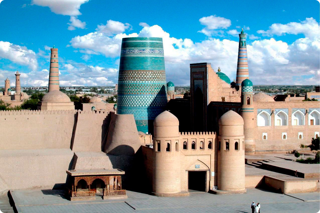 Khiva became a predominantly Muslim city in the eighth century. in 712, it was conquered by Qutayb Ibn Muslim, Governor of the Persian region of Khorasan. In the next few centuries, Khiva, along with the Khorezm state, was under the control of various ruling dynasties of the Muslim world: the Afrikids, seljukids, and Anushteginids.
In the period from 1097 to 1231, there was a state of khorezmshakhs, and Khiva is part of it. However, the highest power of this Empire, which stretched over the territory of modern Uzbekistan, Turkmenistan, southern Kazakhstan, Iran, Azerbaijan, Afghanistan, Tajikistan and Kyrgyzstan, was suppressed by the Mongol invasion. In 1220, the Khorezm state was literally wiped out by Genghis Khan's troops. Khiva was destroyed.
In 1511, the Shibanid dynasty reigned in the Khiva khanate (as the Khorezm state was called in the last period of its existence). In 1598, Khiva became the capital of the Khiva khanate.
The transfer of the capital from Urgench was due to the fact that the riverbed The Amu Darya has changed and the city has developed difficult living conditions: citizens have lost a reliable source of water and access to the Caspian sea.
Khiva's acquisition of a new status gave the city an impetus to development. It began to grow rapidly and as a result became one of the educational and religious centers of the state. A special contribution to the development of Khiva was made by the Arab Muhammad Khan (d. 1621), who ruled in 1603-1621 and made Khiva one of the most beautiful cities of the state along with Samarkand and Bukhara. In particular, at the behest of the ruler in 1616, a madrasah was erected in the city in honor of naming Khiva the capital of the Khorezm state. 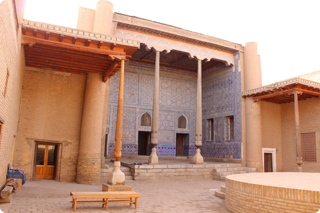 In 1873, Khiva was captured by Russian troops under the leadership of General Konstantin von Kaufman, who had managed to conquer Samarkand five years earlier. As a result, part of the Khiva state passed to the Russian Empire, and the territories became part of the Amu-Darya division of the Turkestan region.
In the Russian Empire, the khanate of Khiva enjoyed a certain freedom: the internal laws of the region were in effect here, and the formal control of Russia had little effect on the life of the state. Khiva became even more important in trade, as Russian merchants began to pass through the city, and Russian firms and trading houses opened here. In addition, the work of local artisans became much more profitable, and their products became in high demand.
The khanate of Khiva finally ceased to exist in 1919,when the local authorities were overthrown by the red Army. As a result, the Khorezm Soviet people's Republic was formed with its capital in Khiva, and in 1924, the Khorezm lands were divided between the Uzbek and Turkmen SSR.

Khiva is located in the lower reaches of the Amu Darya in the Khorezm region of Uzbekistan. The city is divided into two districts: Ichan-Kala, hidden behind the fortress walls, and Dishan-Kala, built outside them. More than 250 historical buildings have been preserved on the territory of Khiva.
Khiva has preserved many architectural monuments that allow you to imagine the life of the Khiva khanate.

Historically, the city of Khiva was divided into two districts. Ichan-Kala, which means 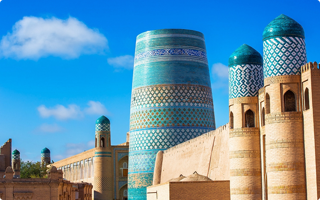 "inner city", is located in the historical center of the city behind the ancient fortress walls. It is included in the UNESCO world heritage list. Dishan-Kala is the "outer" part of Khiva, which was built outside the ring of fortifications.
Architectural monuments preserved in the historical part of Khiva belong mainly to the period of the XVIII-XX centuries. However, archaeological excavations have found the remains of much earlier buildings, including the remains of fortress walls and graves of the 1st Millennium BC, on the Foundation of which new buildings were built.
One of the most ancient structures that survived in Khiva is the mausoleum of Sheikh Seyid Allauddin, which was built in the XIV century. The original burnt brick building built over the Sheikh's grave has survived to this day, but its interior decoration has been lost over the centuries.
The Pahlavan Mahmud mausoleum, built in the middle of the XIX century, became a popular place of pilgrimage. It contains the poet Pahlavan Mahmud, who earned a living as a craftsman and became the hero of urban legends as an invincible hero. Over time, Pahlavan Mahmud was considered the patron Saint of Khiva. As a result, a mosque and a khanaka, a Sufi monastery, were built next to the mausoleum. Burials of notable people appeared around the complex.
The symbol of Khiva is the Kalta minaret, built within the boundaries of Ichan-Kala. Its unusual design makes it unique: blue majolica and glazed tiles cover the entire structure. The minaret is famous for its size: it is more than 14 m in diameter. The name of the minaret Kalta-Minar translates as" short tower": it should have been much higher, but the work on its construction was never completed.
The spiritual center of Khiva is the Friday Juma mosque. 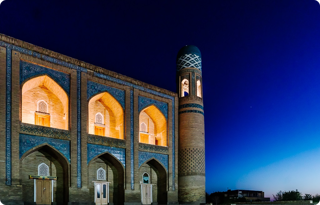 The original building was built in the X century, but in the XVIII century. it was rebuilt at the expense of Khan Abdurahmanamehtar. However, during the construction of the new mosque, 21 columns were used, created for the first building in the X-XII centuries. In 1905, the Kazi-Kalyan madrasah was added to the mosque, where both religious and secular disciplines were taught.
Inside the historical city is located the fortress of Kunya-Ark, which was intended for the ruler of the Khorezm state and was equipped with special protection. Construction of the fortress began at the end of the XVII century, but the work was completed only in the XIX century. In front of the fortress is one of the main squares of Khiva, where military parades and executions were held.
A beautiful view of the historical part of Khiva with all its architectural gems opens from the fortified tower of AK-Sheikh-Bobo, which belongs to the fortress of Kunya-Ark. It was formerly used as an observation tower.

What to see in Khiva

Most of the architectural monuments of Khiva are located in its Central part, which is called Ichan-Kale. It is surrounded by huge fortress walls equipped with 4 gates - from the North, South, West and East. The Eastern gate is connected to the Western one by a major thoroughfare along which architectural masterpieces are spread. This monumental complex is protected by UNESCO. 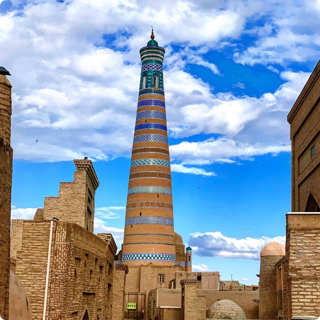 You can enjoy the beauty of Ichan-Kale by climbing the AK-Sheikh-Bobo observation tower. From its height, the entire settlement is visible, as if in the palm of your hand. Striking in its splendor, gracefulness and unusual appearance, the minaret Kalta-Minar. Its building looks as if it was cut off exactly in the middle. The base of the structure is encircled by patterns of glazed bricks of various widths. The minaret was to be the tallest, most elegant and amazing building in the city. But the ruler who conceived such a massive construction project, unfortunately, did not live to see it completed, and after his death, the work stopped. The minaret was never completed, and they gave it the capacious name Kalta, which translates as"short".

Not far from this masterpiece building is located the madrasah of Muhammad Amin Khan. This is the largest building that has survived to the present day, where theology was taught. The most notable element of the structure is the pair hujras. This is the name of the cells where students live. Outside, the unique splendor and solidity of the structure is given by belts of colored bricks and majolica facing.

Another attraction that is interesting for tourists is the ancient fortress 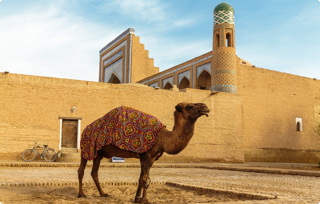 of Kunya-ARKA. Within its walls is an architectural structure-the Palace of Muhammad Rahim Khan. It is known for its extraordinary, striking interior decor. The walls on the inside are decorated with magnificent ganch carvings, and the top is covered with a specialized dye composition. Very close to the Palace is another remarkable building with a height of 2 floors. This is a harem. On its territory there is a great variety of richly decorated and equipped rooms and picturesque chambers.

No one will be left indifferent by the beautiful building of the Juma mosque, which was built in the 18th century. At the entrance to the building, you can see a sign that informs you that this architectural monument was built in the period from 1778 to 1782. What makes this mosque interesting is the fact that it consists of 210 columns. And they were built much earlier, in the period from the 13th to the 15th century. Each of the columns has its own history. They were brought from different places, so they are completely different in appearance. However, each column is a model of harmony and beauty.

Palvan-Darvaza gate is notable for the fact that a whole complex of architectural monuments is located next to it. The Tusch-howli Palace is of great interest. This is a kind of residence of Khiva khans. The structure attracts the eyes, admires the rich and unusual exterior decor and stunning interior decoration. In one place, the majolica facing, figured cartouches, unique carvings with amazing ornaments, and much more are connected.

Here, nearby located Kurnysh-Khan. This Palace with interesting 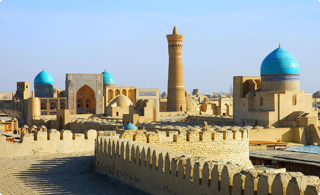 architectural features served the main purpose — in its carved walls, elegant receptions were arranged. In the old days, one of the best decorations of the throne room here was a throne made of wood and trimmed with silver, which looked majestic and rich on a red background. This Palace is famous for its beautiful Ivan with columns and unique carved wall decorations.

Another popular attraction is the Pahlavan Mahmud memorial. This complex was built in honor of the most famous local poet, who was canonized after his death and named the patron Saint of Khiva.

Nearby is the Islam Khoja minaret. This building is 45 meters high. It is notable for the fact that at the very top of it there is a through-light, crowned with a dome. But not only the inner part of Khiva, but also the outer part called Dishan-Kala, which is no less rich in ancient sights, will be interesting for travelers.

The climate in these places is sharply continental, arid. In summer, the average air temperature is +35 °C, in winter it falls to an average of -5 °C. It rains mostly in spring, and there is almost no snow in winter. Humidity is low all year round.

You can get from Khiva to any other city in Uzbekistan by bus or minibus. Travel in them is inexpensive, and the interval between flights is minimal. You can also get here by train. It is worth noting that in summer it is more convenient, because bus drivers often save on air conditioning. Branded Express trains and commuter trains run from Khiva. Not far from Khiva, in the city of Urgench, there is an airport from which flights to many major cities of the country are available. You can get to Urgench by a unique intercity trolleybus.

Public transport is available in the city: buses and minibuses. Taxi services are also available. You can also rent a car for yourself.