About Chimgan and Charvak

One of the most popular ski resorts in Uzbekistan - Chimgan-is located 80 km North-East of Tashkent on the slopes of the Chimgan mountains at an altitude of 1600 m. The Chimgan mountains are part of the Chatkal range of the Western Tien Shan. The ski slopes are located on the Northern slopes of the mountains, so the ski season here is quite long - from December to March. These places are part of the Ugam-Chatkal National Park, which protects the biodiversity of mountain landscapes of the Western Tien Shan. It is worth remembering that you will have to pay an environmental fee at the entrance, as this is a protected area.

At the end of the 19th century, at the foot of the Chimgan mountains, Tashkent Governor Konstantin Petrovich von 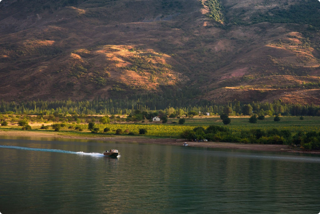 Kaufman built a holiday home, followed by the entire elite. Chimgan ski area has 24 slopes of all levels of difficulty. The maximum elevation is located at an altitude of 1980 m. Slalom tracks of increased difficulty, there are about 5 of them, have a height difference of about 400 m and are served by a cable-chair lift, tracks for beginners have a height difference of 250 m and are served by a tow lift. In addition, there are many restaurants in Chimgan
short rope-and-tow lifts that take beginners to gentle slopes where
you can learn this sport. In Chimgan, there is an equipment rental service and a ski school with experienced instructors. In addition to the skiing in Chimgan you can go snowboarding, the well as free-ride (Heli-ski and backcountry), or Snowmobiling, sledding and ice skating. In summer, Chimgan offers numerous routes through the surrounding mountain landscapes, horseback rides or paragliding.

Beldersay ski complex is located 5 km from Chimgan on the slopes of Kumbel mountain (2200m) at an altitude of 1600 m. The maximum heights of the complex reach 2880 m, so the 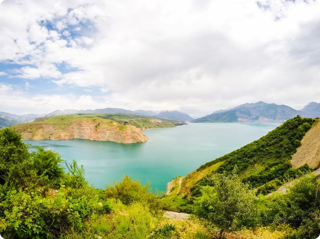 ski season here is longer than on Chimgan, it lasts from November to April. The elevation difference in Beldersay is about 700 m. Most trails are aimed at confident skiers and snowboarders and are classified as "black" and "red". Their length ranges from 500 to 1200 m. All tracks are divided into three ski areas: the upper one, which is served by a rope lift, the lower one, which is served by a chairlift, and the extreme skiing area with unrolled snow fields. The slopes of mount Kumbel are also popular among freeride enthusiasts (haliski and backcountry). It is worth remembering that many virgin slopes are avalanche-prone, so you can only go here with experienced instructors, whose services are offered at the ski school. In summer, Beldersay becomes a major mountain climate resort, where visitors can enjoy the clean mountain air and go on a trip through the mountains.

In summer, the Chimgan mountains attract Hiking enthusiasts. The mountain slopes are covered with juniper and Apple forests, thickets of briar and barberry, there are rapid mountain rivers and numerous lakes and waterfalls. Excursions to Ugam-Chatkal National Park, Chatkal nature reserve and small villages where you can taste Uzbek cuisine are available from local resorts.

Charvak
60 km from Tashkent, in the mountains of the Western Tien Shan, the first stage of the Charvak HPP 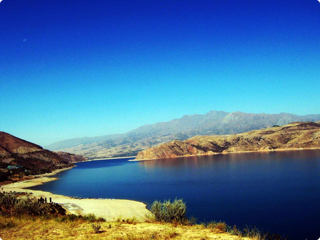 came into operation in 1970. Dam height over 150 m formed a reservoir with a volume of over 1.5 billion m3. The reservoir area amounted to more than 37 km2, the coastline is about one hundred kilometers. The reservoir is fed by the waters of such rivers as Pskov, Koksu and Chatkal. Below the Charvak reservoir is the Khojikent reservoir, and then the Gazalkent reservoir. But these reservoirs can be considered as the beginning of the Chirchik river. As a result of flooding on the bottom of the man-made sea there are traces of ancient settlements, settlements, mounds, rock paintings, Parking of primitive man, traces of ancient mining, historical monuments, etc. 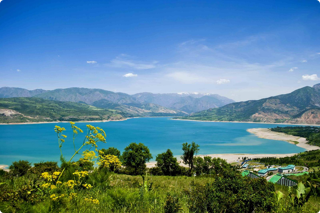 But before the flooding, they were studied by the Institute of history and archeology of Uzbekistan.  In total, more than 150 monuments were recorded ancient culture. In ancient times, through this territory ran the pack routes connecting the Tashkent oasis with Kyrgyzstan and Fergana. Currently, the reservoir is the most visited place for country recreation by residents  Tashkent and guests of the capital. All kinds of recreation areas and children's camps have been created here. They are connectedby a ring road around the Charvak basin, and are located near the villages of Bogustan, Brichmulla 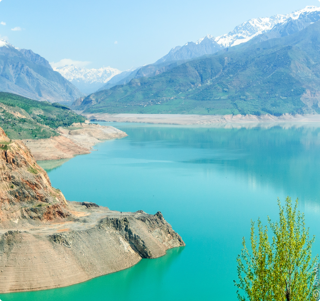 (Buruchmulla), Yangikurgan, Yusupkhan, etc. The largest recreation area is "Chorography", which is located near the village Yusupkhana. There are quite beautiful buildings that resemble pyramids. The beach, which is adjacent to this tourist complex, is quite a convenient place to relax. You can take a tour of the lake on a pleasure boat, or you can rent individual vehicles, such as a jet ski. The water in the lake is very clear and sky-clear, in summer the surface layer is heated to a temperature pleasant for swimming. Several species of fish are found in the reservoir. Sometimes you can see how near the shore a small flock of fry basks in the warm rays of the sun. In the summer, sometimes for a short time there is bad weather, and then a small storm begins on the lake, but it does not worsen the overall mood, since after it, amazing landscapes often open up.

Climate
The climate here is relatively harsh and truly mountainous. The first snow falls in November, which is much earlier than in the rest of the country. For this reason, Chimgan is very popular among fans of skiing. In summer, the heat reaches 25-30 degrees, which is quite a comfortable temperature, for example, for mountain Hiking. It often rains in autumn. Therefore, before you go here, it is worth studying the weather forecast. Otherwise, you may get caught in an avalanche or downpour. The latter does not seem to be terrible. However, wet, loose earth makes it very difficult to move.