The town was founded in the middle of I Millennium BC researchers Proved the age of Bukhara is more than 2500 years.
According to the local mythical tradition, reflected in the" History of Bukhara " Narshakhi, the Foundation of the oldest part of the city — the fortress of Ark-belongs to ancient times and is attributed to the heroes of the epic Siyavush or Afrasiab. However, the large fortified villages of Vardanzi, Ramtin, Varakhsha and the commercial city of paykend were considered older than Bukhara.
The city was formed along one of the major tributaries of the zarafshana river, which splits into several channels here, on a low swampy plain, over which the massive artificial hill of the city citadel — Ark still rises. 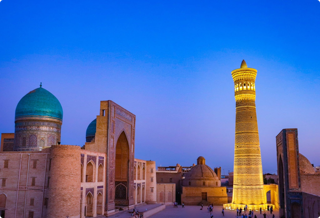 The city has not changed its location for more than 2000 years, which , on the one hand, led to the accumulation of powerful cultural layers of various historical eras, and on the other, led to the destruction of many monuments and traces of previous time[8].
Today, the ancient part of Bukhara remains a "living" city that has preserved the original structure (ark fortress, Shahristan, shakhrud canal). However, the conditions for life and construction were extremely limited: a flat swampy plain, unstable water regime and scarce resources.
The cultural layer on the territory of the city is more than 20 meters. At this depth, archaeologists found the remains of residential and public buildings, dishes and coins, tools and jewelry that date back to the V century BC.unlike in Samarkand, the ground water close to the surface did not allow archaeologists to reach the lowest layer. The most ancient artifacts testifying to the time of the Foundation of Bukhara are hidden by powerful groundwater, so the true age of the city requires further study. 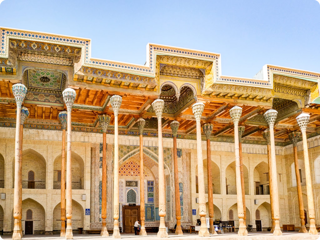 Already in the IV century BC, the territory of the future Arch of Bukhara is surrounded by a rather powerful fortress wall with a wide moat, and at its foot there is also a fortified settlement of dispersed planning. According to one hypothesis, on the site of Bukhara was located the fortress of Baga — an impregnable place on the border between the Sughd land and the Scythians — Massagets — mentioned by Arrian in connection with the campaign of Alexander the great[8].
In ancient times, Bukhara was one of the main cities of Sogd. In the VI century BC, the newly rebuilt city was captured by the Persian Achaemenid dynasty, and in 329 BC — by Alexander the great, during which the urban planning structure was developed. The population of these lands did not accept the conquerors and resisted them. The rule of the Greeks in Sogdiana lasted until the second century BC.
In the subsequent era, the settlement steadily grew, becoming a fairly large city and becoming the commercial, craft and administrative center of the entire Bukhara oasis.

From the end of the I century BC to the half of the IV century, Bukhara was part of the Kushan state.
The flourishing of the city began when Bukhara was elected the capital of the Samanid state under Ismail Samani (892-907). The appearance of the city itself has changed dramatically. 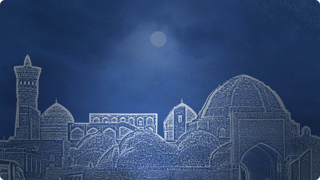 The population has increased significantly.
Bukhara in the X century was already a developed city, surrounded on all sides by craft and commercial rabads. The wall that surrounded and protected it was maintained, and the gate was preserved.
It is known that the Samanids decorated their capital with monumental and spectacular buildings of palaces, government offices, mosques and madrassas. They also created Registan square, the administrative center of the city, between the Western high facade of the Arch and the rabad wall.a Palace with a portal was built here, which al — istahri recognized as the most magnificent in the countries of Islam. And also, there were sofas — the main departmental institutions.
Not far from Registan were located palaces — houses of the Royal family (in the area of Jui-Mulian), distinguished by great luxury. In addition, the entire territory of the city was protected by a fortress wall, which had 11 gates. The state was interested in the development of urban life and industrial forces of the city and sought to create conditions for this, first of all by ensuring the safety of its residents.

In our days, except for the happily surviving Samanid dynastic mausoleum in the city, there is not a single building of this time left on the surface of the earth.
According to As-Saalibi, Bukhara under the Samanids was "the abode of glory, the Kaaba of dominion, the gathering place of outstanding people of the era." According to the geographer istakhri, it was the most populous city in Transoxiana and Khorasan. The development of crafts and trade in Bukhara made it an important economic center.
Narshakhi describes the development of commodity production of fabrics characterized by high quality. According to him, "no city in Khorasan could weave such good fabrics." Bukhara fabrics zandanachi served as 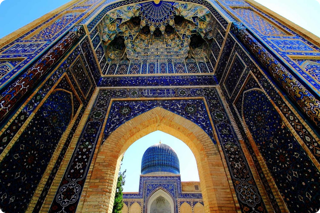 an export item: "merchants came to Bukhara and.. from here, they exported materials to sham, Egypt, and the cities of Roum." The art of Bukhara masters was the subject of imitation. Bukharans went to Khorasan, unsuccessfully trying to establish there the production of equally high-quality fabrics, which were willingly used by the upper layers of society: "there was no king, Emir, Rais, or official who did not wear clothes made of this fabric." Narshahi also reports on a large weaving establishment that was located near the Cathedral mosque, between Ark and Shahristan. It produced particularly valuable fabrics, which were used to pay tribute to the Arab Caliph from all over Bukhara. According to Narshahi, a special official came every year to collect these fabrics from the Caliphate's capital, Baghdad
In the X century, Bukhara became the center of high culture. Many scientists, world-famous writers and artists worked here. Such as the historian Narshahi, the poets Rudaki and Dakiki, the medic, mathematician and encyclopedist Ibn Sina (Avicenna), the historians Balazuri, Tabari, Miskaveyh and others. These scientists have made a great contribution to the development of world science and culture.

In Bukhara, there was a madrasa where medicine was taught. It was a kind 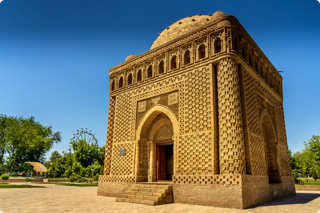 of medical school, where young people were taught medical theory and practice with the obligatory passing of final exams and taking the doctor's oath. There were also such madrassas in Samarkand and Merv. On the site of the dome of Toki Telpakfurushon was a book market, for which the dome itself was called Toki Kitabfurushon. Various books and manuscripts were sold here. The city had a huge library at that time. In his autobiography, Ibn Sina left us a description of it. The library had catalogues, special repositories for books, and so on.
The fall of the Samanids deprived Bukhara of its status as a capital city.
Bukhara survived the Eras of the Karakhanids, Karakitai and khorezmshakhs, and the Mongol invasion. During the reign of Timur (1370-1405) and the Timurids, Bukhara remained one of the most important centers of craft and trade, the "Dome of Islam", pilgrimage, and the birthplace of influential representatives of the Sufi clergy.
During the reign of the Sheibanids, Bukhara first remained in the status of the center of one of the Shires, and then — the capital of the entire state. During the Sheibanid era, dozens of new madrassas, mosques, caravanserais, and trade domes were built in Bukhara. 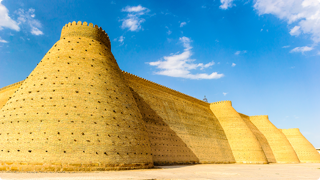 Bukhara is considered one of the Holy cities of Sufism. Many great Sufi saints stayed in the city. One of the most revered — Bahauddin Naqshband mausoleum, which is considered to be the Central Asian Mecca. Believers from different Muslim countries come here to ask for the fulfillment of desires and the aversion of sins. The most famous part of the cemetery of Bahauddin is called the "dakhma of the rulers". In 1993, the historical center of the city of Bukhara was included in the list of UNESCO world heritage cities. INESCO  declared Bukhara the" capital of Islamic culture " in 2020.

What to see in Bukhara?

In Bukhara, there are many attractions that every tourist should see, and it is better to start with the Old city. It is not too large, so you do not need transport — you can walk around the historical center, the more amazing discoveries will be waiting for the traveler at every step. 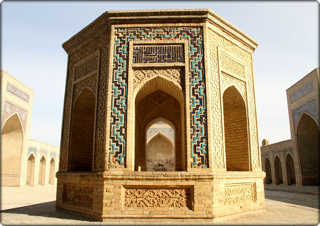 One of the most popular and frequently visited sights of Bukhara is the Kalyan minaret, which was built by order of Sheikh Arslan Khan in the first half of the XII century. According to legend, Arslan Khan killed an Imam who appeared to him in a dream and asked him to bury his head where no man could set foot. The Khan listened to this dream and ordered to build a tower over the Imam's tomb, the height of which reaches 47 meters. The tower was finished with blue ceramic tiles, which is considered the first use of this type of decoration in construction. Later it was used throughout Central Asia.
Kalyan minaret is also called the Tower of Death, since until the beginning of the XX century in Bukhara, criminals were executed by dropping from the top of this minaret.
On the Registan square of Bukhara stands the Ark citadel, which is the summer residence of the emirs of Bukhara. The citadel has always been a functioning fortress that reliably protected the emirs of Bukhara and their entourage from any attacks. There is everything you need for the life and functioning of the state apparatus — temples and palaces, warehouses, stables, workshops, a well with water and even a prison. Now there is a Museum on the territory of the complex.
The center of the historical part of Bukhara is Labi-Hauz, which received its name from the Persian language, which translates as"ensemble by the pool". The complex fully justifies this name — between three buildings of the XVI century lies a large pool. Structures include the Nadir-Devanbegi mosque and two madrassas-Kukeldash and Nadir-Devanbegi, in addition, the Toki-Zargaron Bazaar is located nearby.
Also interesting monuments of ancient architecture in Bukhara are a variety of madrassas and numerous mosques-Magoki-Attori, Khoja-Kalyan; mausoleums such as Buyan-Kuli-Khan, Chashma-Ayuob or the magnificent Saifiddin-boharzi. 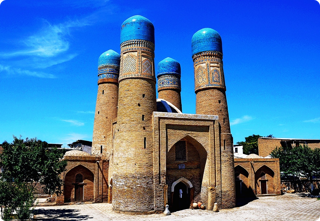 There are historical monuments and attractions in the vicinity of the city. For example, the almost destroyed caravanserai in the settlement of kermin called Rabati-Malik, the tomb of the XVI century, where the sheikhs of Bukhara were buried, the settlement of Varakhsha, the Holy mosque of Namozgoh, which is located outside the city and was previously a shelter for pilgrims and monks.
6 km from the city is the Garden of Stars and the moon, where you can see the Emir's Palace-the complex is open from Wednesday to Monday. To the East is the mausoleum of Bahautdin Naqshband, where you can find the tomb of the ruler who became the founder of the most famous and powerful Sufi order in Central Asia.
When all the sights are seen, you can go to the bath complexes of Bukhara, which are no less a tribute to the ancient culture and history of the city. Visit one of the most famous hammams in Bukhara — Borzi-KORD, which is open to tourists from 14-00 to 00-00. The visit includes not only relaxation in the steam room, but also massage. For women, there is a separate Kunjak bath located next to the Kalon minaret.

What to buy in Bukhara?

Bukhara is one of the most important points on the Silk Road. This is the era that the huge domes of the city's old covered markets remind us of. These domes were built at intersections of the busiest streets to redirect pedestrian traffic, to maximize the release of the main highway, where all trade was previously carried out. The domes were called "taki", and under them were shops and craft workshops. Today in Bukhara there are only 4 so and It is under these domes that traders sell masterpieces of Oriental crafts.

The climate of Bukhara is sharply continental. Dry hot summers and cold wet winters. To visit Bukhara, we recommend planning your trip from mid-March to mid-may and from mid-September to early December.