Khiva is a real open-air Museum, one of the most ancient cities of Uzbekistan, its age is more than 2500 years.
Khiva has a very interesting structure-a city within a city, that is, the old city of Ichan-Kala, surrounded by powerful high defensive walls, inside of which there is all the beauty of history, expressed by the sights of the middle ages and the outer city-Dashan-Kala.
There is a legend that Khiva was built by the son of Noah from the Bible around a well and this well is located in Ichan-Kala to this day, among the incredible height of minarets and striking beauty of madrassas.

Itchan-Kala is a historical, walled inner part of the city of Khiva in Uzbekistan, which is more than 2,500 years old. In 1990, it was added to the UNESCO world heritage list, and now it is under special protection.

The length of the internal defensive structure is more than two kilometers, the thickness of the walls is 5-6 meters, and the height is 8-10 meters. The structure is fortified with massive towers.

The outer and inner defensive walls of Khiva are built of adobe (bricks made of clay soil with straw added), with protruding towers every 30 meters. Previously, there were ditches filled with water in front of the Ichan-Kala fortress, but now there is almost nothing left of them. With regard to the external appearance of the fortress Ichan-Kala, it has survived virtually intact, even down to the gate: North — Bagchi-Darwaza, the southern — Tash-Darvaza, the Eastern — Palvan-Darvaz and Western — Ata-Darvaza. But only the gates remained of the external defensive structure of Dishan-Kala.

The top of the fortress is notched, with narrow embrasures. Above the gates were special viewing galleries and small towers from which it was possible to reflect the enemy's attack.

Tourists who have visited Ichan-Kale, say that it will take at least two days to slowly see all the sights and walk through the narrow streets of the ancient city of Khiva. 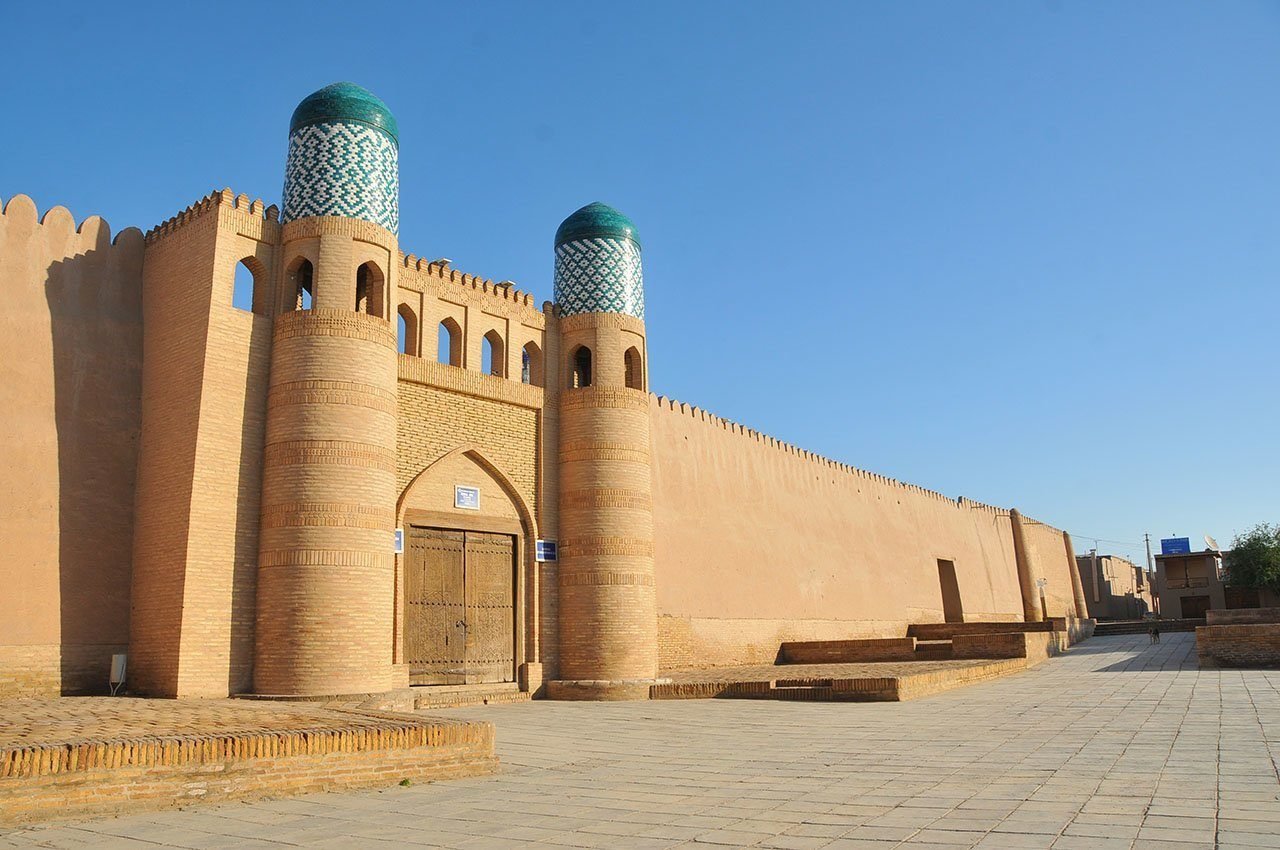 The Kunya-Ark Citadel is considered the oldest surviving residence of the Khiva khans. It was built at the end of the 17th century. According to scientists, the Kunya-Ark citadel was erected on the ruins of former structures. The fact is that during archaeological excavations coins and fragments of ceramics dating back to an earlier period were found. More... 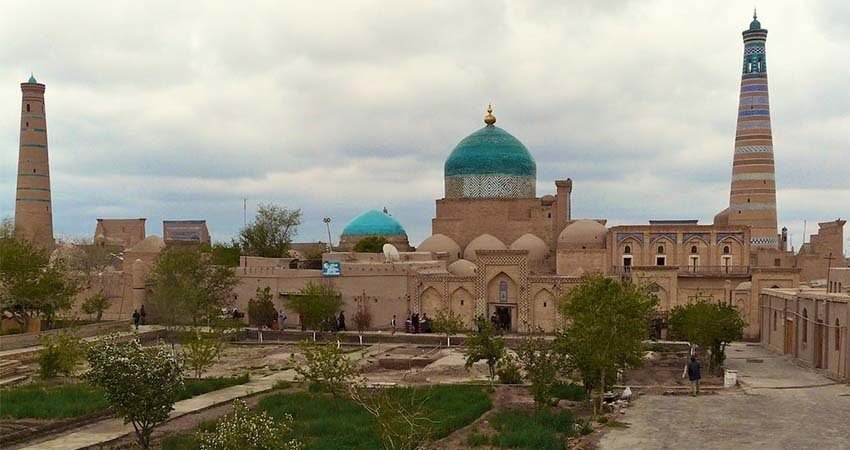 The inner city of Khiva is rich in architectural masterpieces. Against their background, the turquoise dome of the Pahlavan Mahmud mausoleum rises. This tomb is only part of a large memorial complex. The architectural ensemble also includes a mosque, a small madrasa, a Sufi monastery (khanaka), dormitories for the blind and the tomb of Isfandiyar Khan. More... 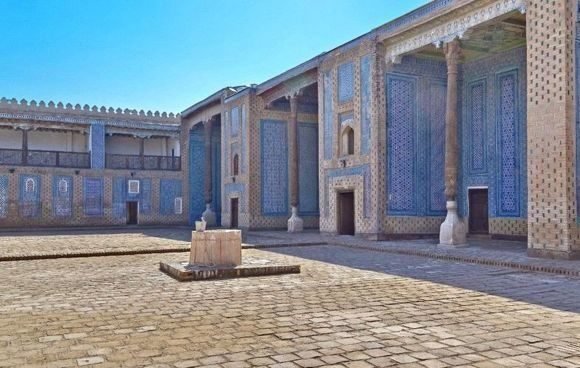 The Tash-Khovli Palace (1830-1838) is located in the Eastern part of Ichan-Kala in Khiva. It is a sample of the greatness and power of the construction of buildings of those times in the Khorezm style. Tash-Khovli Palace is a Palace complex in Khiva (Uzbekistan), the main Palace of Khiva khans. More... 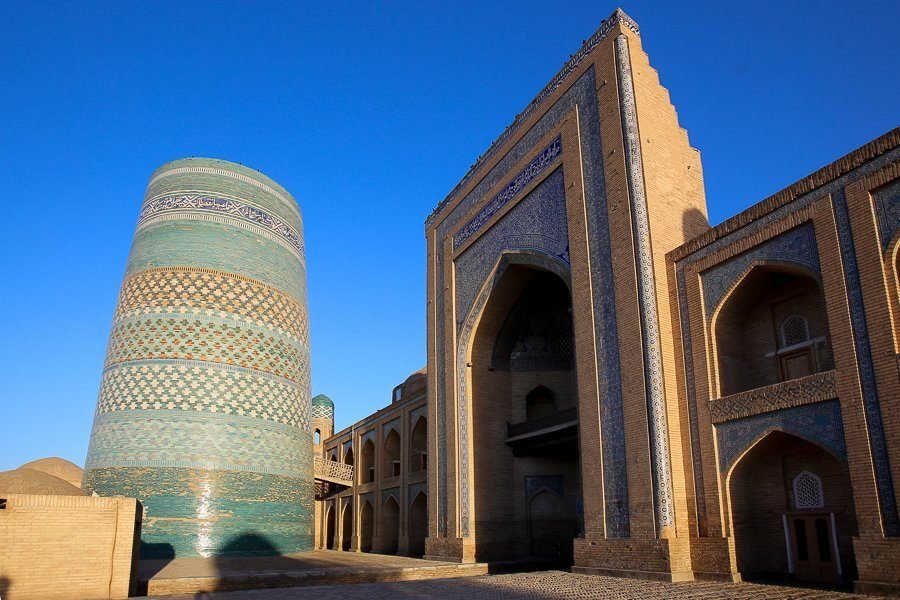 Kalta-minor Minaret was conceived by the Khan of the Khiva khanate, Muhammad Amin Khan, as the largest and tallest in the Muslim world. According to his plan, the height of the minaret was supposed to be 70-80 meters, with the diameter sharply decreasing with the height, which would make the minaret more durable. The diameter of its base is 14.2 meters. More... 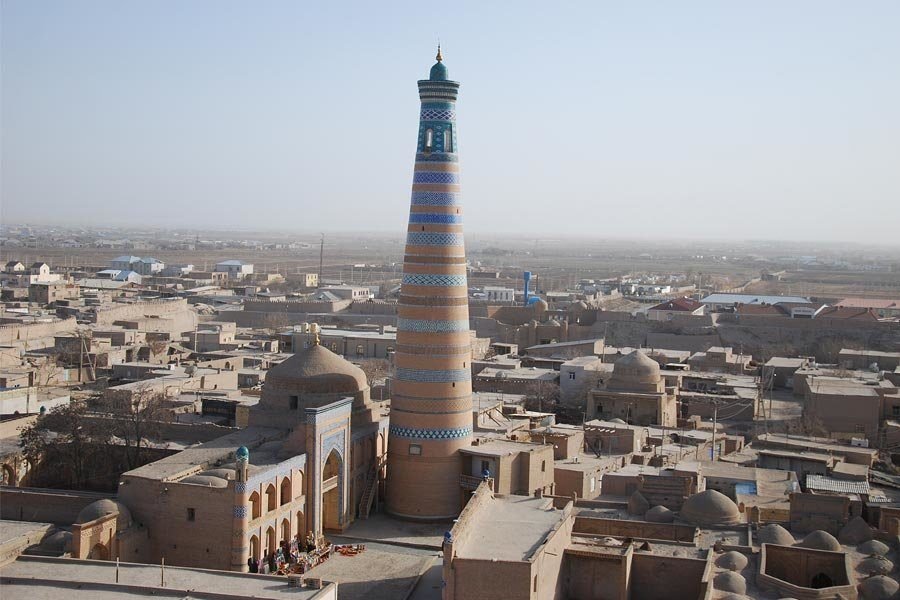 One of the most notable buildings of the ancient part of Khiva is the minaret and madrasah, which are part of the complex of buildings of Islam-Khoja. The complex resembles the architecture of the XI–XIV century, although it was built a little more than a century ago, at the end of the first decade of the XX century. According to the clever idea of the architect, the attractiveness of the buildings creates an unprecedented contrast: the most elevated minaret of the city is located next to a miniature madrasah. More... 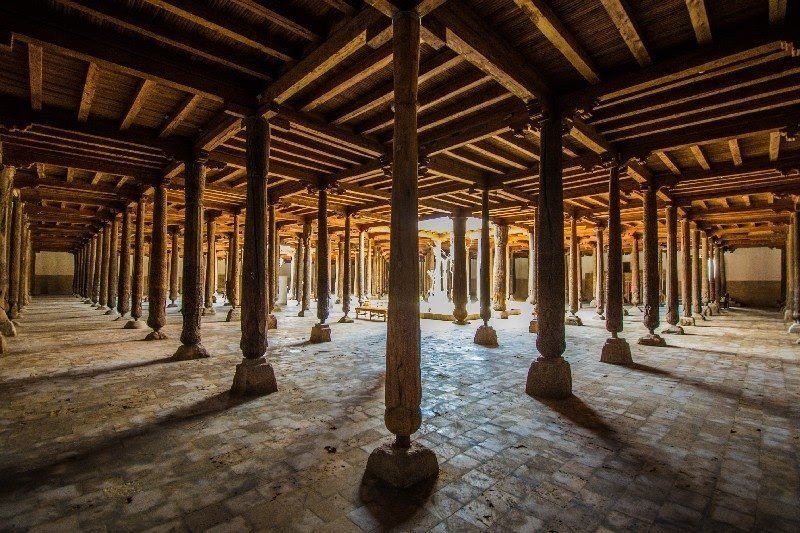 Djuma Mosque - which means “Friday Mosque” (in honor of the day of special prayer) - the most significant prayer building of ancient Khiva, occupying an honorable position in the center of Ichan-Kala. Unlike traditional architecture, the building is deprived of domed ceilings, arches and visually highlighted portals at the entrance. This is a one-story building with a powerful wall, in which three entrance apertures are made. More... 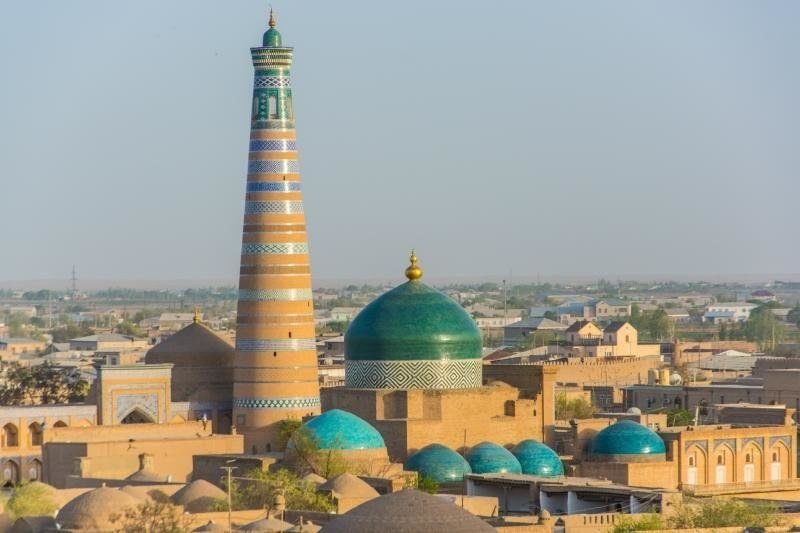 Islam Khoja was the chief vizier of the khanate of Khiva under Muhammad Rahim Khan II (1863-1910) and his son Asfendiyar Khan (1910-1920). At his expense, a cotton gin factory, a hospital, a pharmacy, a post office, a Telegraph office, and a secular school were built in Khiva. In 1908-1910, Islam-Khoja built an ensemble in the South-East of Itchan-Kala, consisting of the smallest madrasah and the highest minaret of Khiva, which dates back to the ancient minarets of the XI-XII centuries. More... 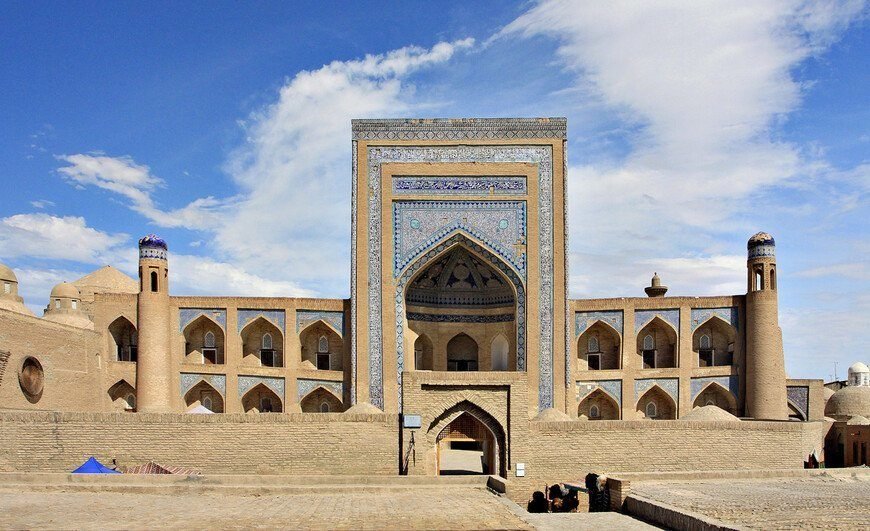 The Allakuli Khan Madrasah, along with the adjacent caravanserai of Alla Kuli Khan, is part of the complex of historical and architectural monuments of Itchan-Kala in the city of Khiva in Uzbekistan, which is a Museum of buildings of the XIV century under the open sky. More... 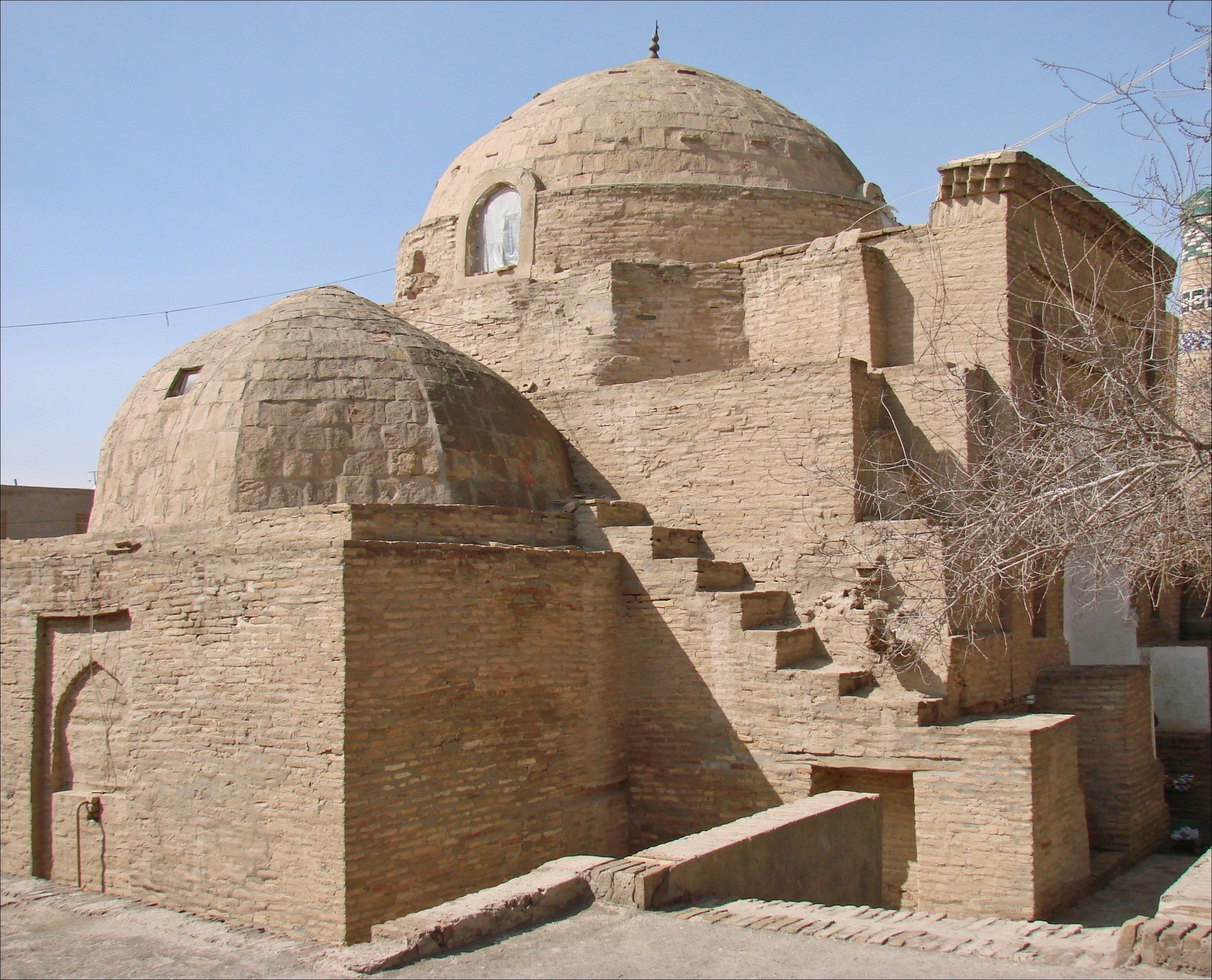 The Sayid Allauddin Mausoleum is one of the oldest buildings in Khiva. The building of the mausoleum is adjacent to the walls of the Matniyaz Divan-Begi madrasa on the Eastern side and is an interesting object to visit while walking around the old city. The mausoleum of said Allauddin, along with other ancient buildings of Khiva, is included in the list of UNESCO world heritage sites. More... 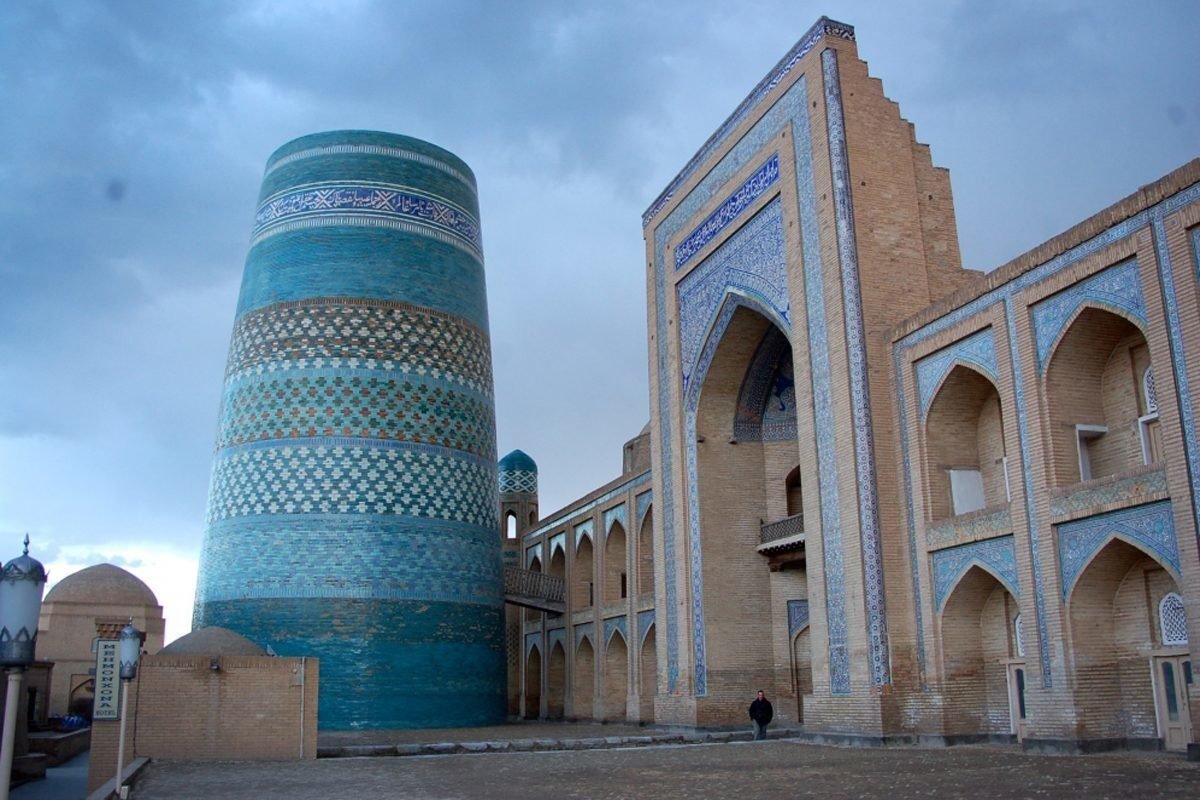 "This beautiful building will stand forever for the joy of posterity." The Arabic inscription decorating the 25-meter portal of Muhammad Amin Khan Madrasah is roughly translated into Russian. As time has shown, the phrase was prophetic. One and a half meter walls of burnt brick construction have survived to our days almost in its original form. More... 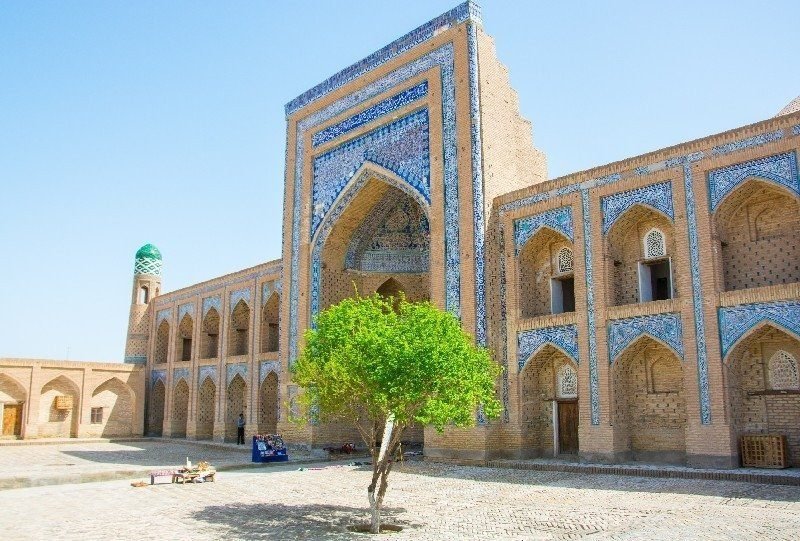 Muhammad Rahim-khan Madrasah is part of the complex of attractions of the ancient city of Itchan Kala in Khiva. One of the most famous and large-scale Khiva madrassas was built by Muhammad Rahim Khan near the Kunya-Ark citadel in the last quarter of the 19th century. The Khan became famous as an enlightened ruler who patronized the people of science and poets. More... 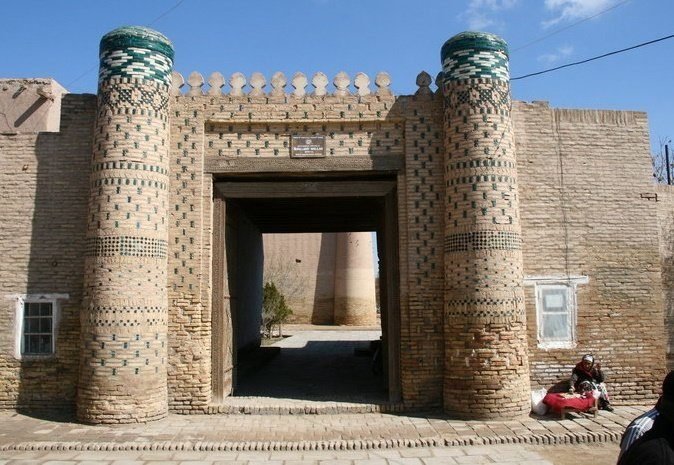 The summer residence of Nurullabai Khan of Khiva was built in the period from 1906 to 1912. The Palace is located in the outer city of Khiva, Dishan-Kale, and a ticket from Itchan-Kala is enough to visit it. The Palace impresses with its splendor and is very different from other palaces built by the khans in different periods, it looks more like the residence of a European monarch in the art Nouveau style. More... 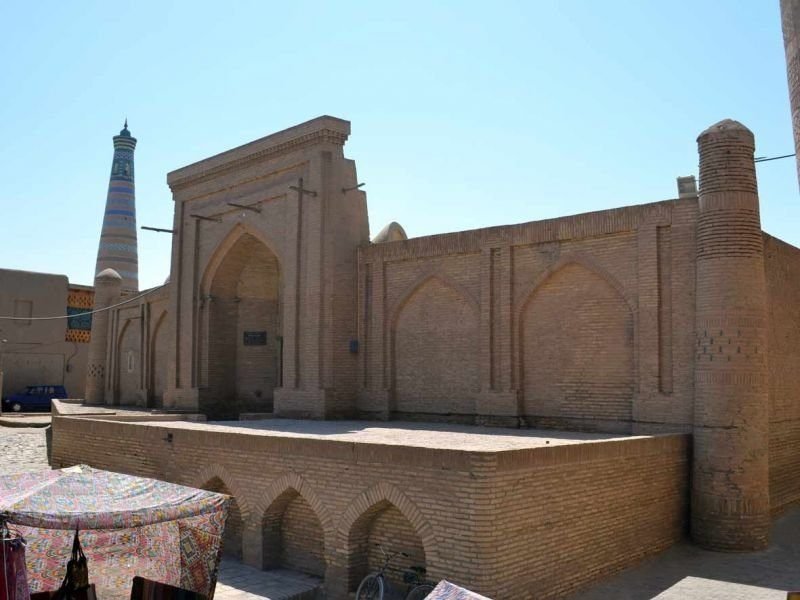 The Abdullahan Madrasah was built in 1855 at the behest of the wife of Kutlug Khan - Murad - Inak in honor of their son Abdullah, who was killed at the age of 17 in a battle with the Turkmens.
On the main facade there is a portal with an octagonal niche flanked by deaf lancet arcades. More...