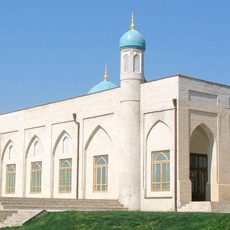 Tillya Sheikh Mosque, built in 1856-1857, is part of the famous historical and religious complex Hast Imam and is located opposite the Barak Khan madrasah. This still functioning mosque-Namazgoh, whose name translates as "Golden Sheikh", owes its appearance to the Kokand Khan Mirza Ahmed Kushbegi and, according to legend, keeps the Golden hair of the prophet Muhammad in its walls.

The square-shaped prayer hall of the mosque is separated from the entrance by partitions and is a winter room for prayers. In front of the mosque is also attached ayvan (gallery) for outdoor prayers, there are two minarets on the sides, a library and utility rooms. The huge minarets of the mosque once served as a kind of beacon for merchant caravans. Inside, a spiral staircase has been preserved, along which spiritual Ministers climb up and call all the faithful to prayer. The window openings of the mosque are decorated with traditional panjara (patterned ganch bars).

The Till-Sheikh mosque has ceased to be the main mosque in Uzbekistan, but it is still one of the largest active mosques a  nd the main religious attractions of Tashkent. 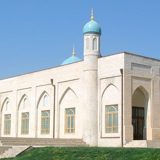 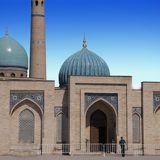 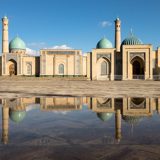