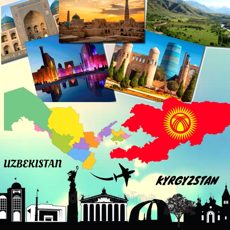 Day 1 Tashkent
Arrival in Tashkent. At the airport you will be met by our comfortable shuttle service and taken to the hotel. Check in at the hotel. Free time. Overnight at a hotel in Tashkent.

Day 2 Tashkent
In the morning a delicious breakfast at the hotel. Then, without wasting time, you will begin a tour of the capital of our country. You will visit: Hast-Imam Square, Barak Khan Madrasah, Mazar Kafal-Al-Shashi Mausoleum, Kukeldash Madrassa, Tashkent's oldest bazaar - Chorsu. After visiting the oldest places in the City of Tashkent, you will have the opportunity to take a walk and take many vivid photographs in Independence Square and Amirtemur Square. Free time. Overnight in Tashkent.

Day 3  Tashkent- Samarkand
In the morning after a delicious breakfast at the hotel, our comfortable shuttle will take you to the railway station in Tashkent and you will travel by high-speed train to another amazing city in our country - to Samarkand. Meeting at the railway station of the city of Samarkand. Transfer to the hotel. Settlement and free time. Overnight in Samarkand.

Day 4  Tashkent- Samarkand
After a delicious breakfast in the hotel, you will immediately begin the tour: first you will find yourself in the very heart of Samarkand on the Registan Square, which consists of three amazingly beautiful madrassas - Ulugbek, Tilya-Kori, Sher-Dor. Then visit the Guri Emir Mausoleum. You will have a busy day, because the tour continues, further according to the program: the tombs of the famous Temurids dynasty, the medieval mosque “Babi Khanum”, the ensemble of the tombs “Shahi-Zinda” will reveal its secrets to you, share the beauty of the stars of the Ulugbek observatory. Free time. Overnight at a hotel in Samarkand.

Day 6  Bukhara
Have a delicious Breakfast at the hotel in Bukhara You will have a walking tour. You will hurry to meet new emotions. You will be amazed by the mausoleum of "Samanids", the tomb of "Chashma Ayub", intrigued by the complex "Bolo-Hauz" and "POY-Kalyan", will make you think about the important ancient fortress "Ark" and a number of madrassas - "Abdulaziz Khan", "Kosh", "Ulugbek", "Kukeldash", "Nadira Divanbegi", will please the ensemble "Lyabi-Hauz" and trade domes. After such a busy tour, you will have free time. Overnight at a hotel in Bukhara.

Day 7  Bukhara - Tashkent
Have a delicious Breakfast at the hotel in Bukhara You will have a walking tour. You will rush to meet new emotions. You will be amazed by the mausoleum of "Samanids", the tomb of "Chashma Ayub", intrigued by the complex "Bolo-Hauz" and "POY-Kalyan", will make you think about the important ancient fortress "Ark" and a number of madrassas - "Abdulaziz Khan", "Kosh", "Ulugbek", "Kukeldash", "Nadira Divanbegi", will please the ensemble "Lyabi-Hauz" and trade domes. After such a busy tour, you will have free time. Overnight at a hotel in Bukhara.

Day 8 Tashkent-Chimgan
Breakfast at the hotel. Departure from Tashkent by a comfortable bus towards the Chimgan Mountains (80 km, about two hours on the way). The path to the Chimgan mountains runs through the picturesque settlements of the Tashkent region. Upon arrival at the Chimgan tract, a walk through the mountains. If there is a cable car in the Beldersay gorge, the length of which is more than three km, then you can ride to the top of Mount Kumbel (2400 m), where the longest ski slope in Uzbekistan is located. Next, a trip to the shore of the Charvak artificial reservoir, a lake whose coastline is 100 kilometers, like a blue gem, is framed by a chain of mountain ranges. Descent by car along the serpentine road to the restaurant "Cinara’s". In this picturesque place, which has amazing energy, carefully preserved magnificent petroglyphs - cave paintings of the late Stone Age. After returning to Tashkent. Overnight in Tashkent.

Day 10 Bishkek
Breakfast at the hotel and we embark on a city tour, visiting Pobeda (Victory) Square,Duboviy (Oak) Park, Central Ala-Too Square, Fine Arts Museumand National Philharmonic. Observe some of the finest examples of Soviet architecture.
After lunch at a local restaurant, visit the busy andcolorfulAsian Bazaar where you can purchase tapestry offabrics and local produce. Drive out of the city to visit Ala-Archa Gorge (45 km), aNatural Park located on a spur of the Tien-Shan Mountainrange. Embark on a short hiking tour to see panoramic views ofthe gorge. Dinner at local restaurant. Check-in hotel for the night.

Day 11 Bishkek – Issyk-Kul
After breakfast, depart for Issyk-Kul Lake, the secondlargest alpine lake in the world after Lake Titicaca in South America. Measuring 182-km long by 58-km wide,the lake appeared as a result of volcanic activity. Issyk-Kul means “warm lake” and refers to the fact that it neverfreezes, despite its high elevation. With diverse flora and fauna, Issyk-Kul Lake and the surrounding environmentsare rightly considered to be one of Central Asia’s mostremarkable locations.  En-route, on the outskirts of Tokmok town we visit the archaeological center Burana Tower(11th c. minaret).The Burana Tower is a minaret built in the 11th century on the ruins of the ancient city Balasagun. It is 24 meters in height. Explore ruins of that important tradingpoint at the Great Silk Road and also watch a collection ofBalbals (stone warriors) and Turkic ancient tombs.  We continue our way and drive to Issyk-Kul through villages and little towns, notably Kemin, Balykchy, Tamchy, Sary-Oy, Kara-Oy.  Check-in to hotel on arrival to Cholpon-Ata atIssyk-Kullake.  The rest of the day is free time for you to explore the areaand perhaps even a swim in the lake!

Day  12 Issyk Kul –Karakol – Yurt Camp in Bokonbaevo
After breakfast we visit the open-air Petroglyph’s Museum (datingback to 800 B.C.) These petroglyphs were madethousands yearsago by local shamans. The images are primitive long hornedibex, horses, camels and snow leopards. There are several thousands of petroglyphs here, providing a glimpseinto the world of the Iron Age. Next wedrive approximately 2 hours to Karakol city, formerly Przhevalsk. A Russian military outpost founded on 1 July 1869, Karakol grew in the 19th century after explorers came to map the peaks and valleys separating Kyrgyzstan from China. In the 1880s Karakol's population surged with an influx of Dungans, Chinese Muslims fleeing warfare in China. Lunch at local café en-route. On arrival, visit the Dungan Mosque that was built in aChinese-style without using any single metal nail. Visit an old wooden Russian Orthodox Church. After lunch we depart for Jetti-Oguz Gorge (“seven bulls”)that is famous for its red rocks formations. Enjoy the scenery and take plenty of photos of a Broken Heart Mountain. Next we drive Ethno Village and Yurt Camp "Almaluu"where you immerse into the Kyrgyz nomadic culture and overnight in yurt, made out of wooden carcasses and covered with felt. Enjoy the amazing starry sky!

Day 13 Bokonbaevo - Bishkek
Let’s explore the stunning place called Skazka canyon in the morning. Canyon is one of the most picturesque in Kyrgyzstan, full ofbizarre sandy forms, due to which the canyon got its sonorous name. Over the millennia of erosion, red sandstone has taken shape that resembles the outlines of fabulous monsters and ancient castles from ancient legends.
Continue towards Bokonbaevo village where we willmeet a local eagle-hunter. There are still some peoplein the village who continue this ancient way of hunting.They train eagles and hawks when they are still young andevery winter, go with them to the mountains for hunting.Here you’ll learn many interesting facts about this way ofhunting and you’ll be able to take photos while keeping thebird on your hand! Hit the road and return to Bishkek. Dinner in local restaurant. Return to hotel for the night.

Day 14 Bishkek
In the morningwe transfer to the airport foryour flight back home with everlasting memories of Kyrgyzstan. End of the program.

The tour price includes:
1. Accommodation in a double room with breakfast;
Accommodation in a yurt camp as a group.
2. Flight Tashkent - Beshkek;
3. Transfer according to the program;
4. Program excursions in Uzbekistan and Kyrgyzstan;
5. Folk show in Bishkek;
6. Exhibition of falconry;
7. Services of a professional guide on excursions;
8. Tickets for the Tashkent-Samarkand-Bukhara-Tashkent high-speed train (Economy class);

The price does not include:
1. International flights;
2. Insurance;
3. Entrance tickets to the monuments;

4. Personal expenses;
5. All that is not indicated as included;